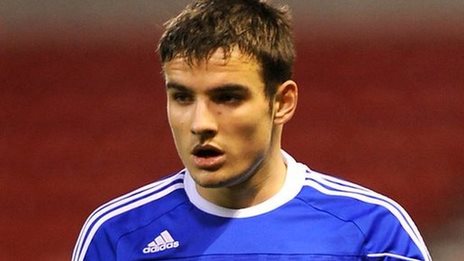 Blyth Spartans manager Alun Armstrong is delighted to welcome Carlisle United defender David Atkinson to the club – after working with the 23-year-old during his time at Middlesbrough.

Atkinson has arrived at Croft Park on a one-month loan deal from the League Two side and Armstrong isn’t shy in revealing that Christmas has come early for him – as he revealed just how good a player Spartans will have at their disposal until the start of January.

The 41-year-old said: “I’ve known David since he was at Middlesbrough and everyone there knew how good a player he was. He’s such a talented footballer.

“He was unfortunate with injuries – otherwise – I’m sure he would have went on to play for Middlesbrough’s first team, without a shadow of a doubt. He’s played at England level and I’ve been trying to get him in for a few weeks now.

“He did get injured a few weeks back and it’s taken a while for him to get back fit, but I’m just chuffed to bits that we’ve been able to get someone of his quality in.

“I think he’ll bring a lot of the defensive qualities that we need at this moment in time and for the next month.”

Atkinson’s parent club Carlisle state that the defender is able to play anywhere across the back-line and the Blyth boss is adamant that he is looking to make use of that versatility during his loan spell at the club.

Armstrong added: “David’s one of those that can play anywhere. He’s a good reader of the game.

“He reads the game very well and he’s a great footballer – as you can imagine coming through Middlesbrough’s academy. He’s technically very good with the ball, he’s quick and he’s strong.

“He’s not a big dominant 6ft 4 centre-back, but he does know how to deal with things. He can play anywhere.

“It’s going to be tough for places, but I’ve said before that I’m not going to bring someone in on loan unless I’m going to play them. As long as he’s fit and he’s available, David will be playing.”

Despite rating the defender very highly, the Spartans’ gaffer can’t see Atkinson having his loan extended in order to remain in the Evo-Stik Premier League in 2017. That being said, his arrival couldn’t have been timed better, with Blyth facing no less than three of their promotion rivals during December.

Armstrong admitted: “Financially, it might be a struggle but I’d love to be able to keep someone of his quality. We need to be realistic for the lad as well though – as we know that he’s coming here to get match fitness and he should be playing a lot higher than this level, without a shadow of a doubt.

“I cannot see it being extended, but – hopefully – we’ll get some good games out of him within the next month. It’s a tough month for us – with top-of-the-table clashes against Buxton, Rushall Olympic and Whitby Town – so I needed to make sure I had someone that could really strengthen us and stop us from conceding the daft goals that we seem to be at present.”