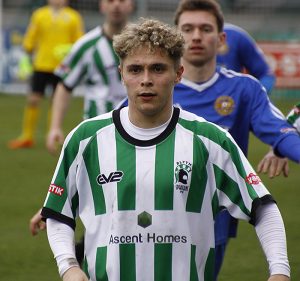 Blyth Spartans are pleased to announce a twin singing with the news that Adam Wrightson has signed permanently for the club form Gateshead as well as securing the services of goalkeeper Shaun MacDonald from Gateshead.

Wrightson, has been on loan at the club since the middle of January and saw his loan spell extended in February. However, after Gateshead agreed to a mutual termination of his contract, the youngster has put pen to paper on a permanent deal at Croft Park. Since joining in January, Wrightson has gone on to make 12 appearances and scoring 2 goals.

Also, joining the promotion push is Shaun MacDonald who has joined Blyth Spartans on loan until the end of the season. The 20 year old stopper has failed to make a single competitive appearance for Gateshead this season but spent the early part of the season on loan at Consett. The move with see MacDonald continue to further his development whilst promoting backup to the goalkeeping department.