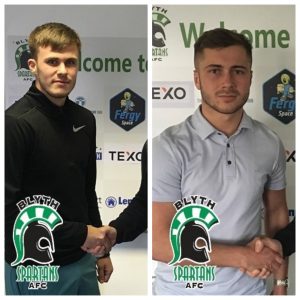 Clark, installed as Blyth’s new boss on Saturday, has immediately begun his preparations for the 2019/20 campaign after tying down Robbie Dale, Ryan Hutchinson and Jack Butler to new deals on Wednesday.

And with discussions still ongoing with members of last season’s squad, Clark has further added to his squad by acquiring Robson and Orrell from the Northern League Division One club.

The 19-year-old is a versatile player, often featuring at centre-back, right-back, centre-midfield and right-wing during his two seasons in the Northern League.

Orrell started his career in Sunderland’s academy, though joined Gateshead into 2015 following his release from the Black Cats.

A string of impressive performances for The Heed prompted a move to then League One outfit Chesterfield – which included a brief loan spell at Matlock Town.

Hartlepool United was to provide the next step for Orrell with spells at Spennymoor Town and Benfield then following in succession.

Orrell can play anywhere across the front three or off the main striker.

If you’d like to donate to our Boost the Budget fund set up by our Supporters’ Club to help Clark build his squad, the link is available below: