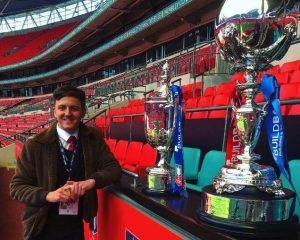 Blyth Spartans are delighted to announce the appointment of Northumbria University journalism student Dan Simmonite as programme editor, replacing the outgoing Craig Dobson who has moved onto a role with the FA’s Football Museum.

Previously an intern with BT Sport, as well as working for the Northumberland FA in the past six months, the 20-year-old from York has joined the media team at Croft Park ahead of the new campaign.

Dan has also helped produce some of the content for the programme of EBAC Northern League Division Two side Alnwick Town.

“I’m absolutely delighted to accept the position with Blyth Spartans and I’m very grateful for the opportunity to be involved with the most famous non-league club.”

“I have a background in football media having worked with my hometown club York City last season and Northumberland FA alongside my degree in Journalism at Northumbria University.”

“What attracted me to the role was the stature of the clubs’ media department. I see this as the perfect platform to present and develop my skills and I’m ready to give my full efforts to the club.”

The new programme editor then spoke about what he hopes to bring to the Spartans matchday magazine this season, with an emphasis on statistics.

“I’m a bit of a statto myself so in this year’s programme you can expect a lot of statistics and quirky facts which you will all hopefully find interesting, as well as introducing some more interactive pages for the fans to enjoy.”

“I’m ecstatic to welcome Dan to the clubs’ media team. Throughout the application process he impressed us with his passion and enthusiasm for the role.

“He brought some fantastic ideas to the table and we expect big things from Dan this season, we have no doubt he will deliver.”

The last word was left to the new appointment:

”I’m itching to get going and work with some fantastic people at the club.