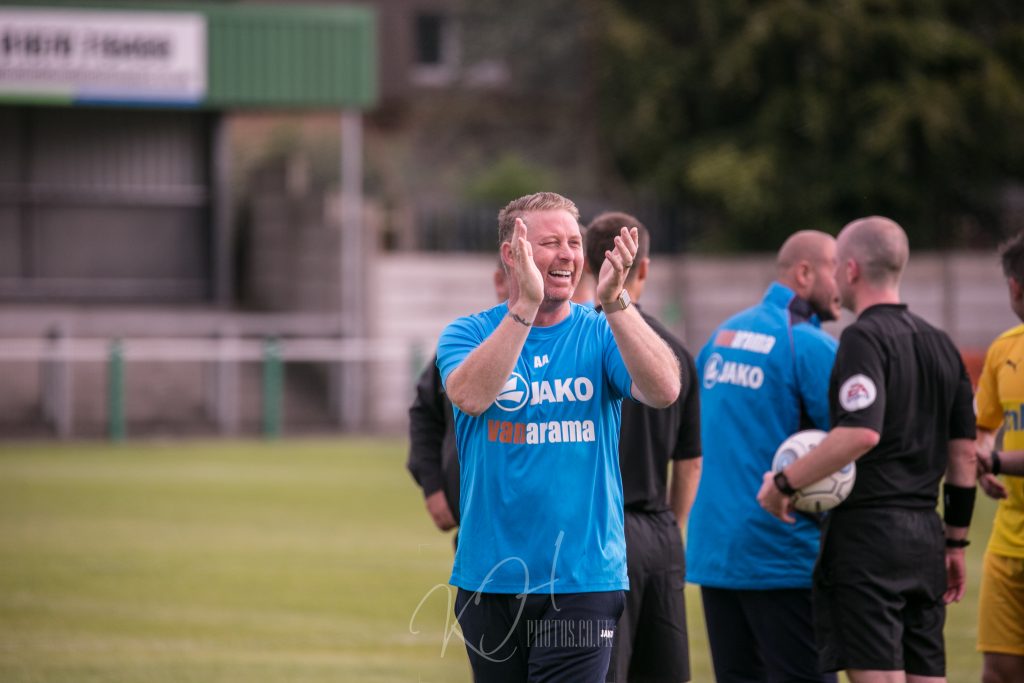 Alun Armstrong praised his side’s work ethic and commitment after a ‘backs to the wall’ second half against Darlington FC in a 1-1 draw on Wednesday evening.

Spartans took the lead through a Dan Maguire strike after five minutes, before Reece Styche equalised three minutes before the break.

A second have deluge on the Spartans’ goal came to nothing – with Armstrong’s side coming away with a point.

“A well earned point,” the 43-year-old stated after the game, “was it a fair point? Probably not, but it’s the type of point we need to start picking up, an ugly point – last year we’d have lost this game.”

“Second half it was a backs to the wall job, everyone could see that, Darlington chucked the kitchen sink at us, but we dug in, got a bit of luck and held firm to take away an unexpected point.”

Armstrong believe his side should have gone 2-0 up in the early stages, with Spartans threatening for the first twenty minutes of the game.

“We should have had a two-goal lead to be honest, ‘Nipa’ has another chance to shoot soon after his opener and chooses to pass instead. After that we got dragged into playing their game, we didn’t play any kind of football, but when we did get the ball down and play we had some success – but it was not a regular occurrence.

“Although I’m delighted to come away with a point, the performance is not anywhere near what we are capable, but Darlington are a good side, simple as that.”

The front three of Styche, Simon Ainge and Stephen Thompson caused the Spartans back-line fits all afternoon – Styche hitting the post and having two goals disallowed, while Thompson cannoned a strike off the crossbar from 50 yards out.

“We knew their gameplan,” insisted Armstrong, “they have two guys up top who cause mayhem with their style of play and their movement, and Thompson is their main threat.”

But after complimenting the front three for Darlington, the former Middlesbrough and Ipswich Town centre forward gave particular praise to his back four.

“I’ve got to mention the defence, ‘Busted’ dug in all evening against Thompson and had a hard time of it, and I’ve got to say Aaron Cunningham was outstanding.

“The lad (Cunningham) was distraught at half-time because he knew he’d made a mistake, but he showed in the second half the character and determination he has, diving into everything and making some vital blocks along with ‘Buds.’ For a 20-year old going up against those two big, powerful strikers, he was immense.”

With the likes of Robert Dale, Michael Liddle, Bradley Fewster, Sam Brotherton and Damen Mullen all unavailable, new signing Andrei-Vasile Ardelean was thrust into the squad, and appeared late on as a substitute. Youngsters Bradley Skirpan and Jack Butler were both named on the bench.

“We’re down to the bare bones again, we’ve been unfortunate with injuries – and Michael Liddle booking a holiday didn’t help either.

“I didn’t know during last Saturday’s win that Robbie picked up a hand injury, and we have a few playing with niggles – I’ve told the lads they’ve just got to go out their and do their best, they’re all we have.”

And despite all the pressure from the hosts, Adam Wrightson had a golden opportunity to steal all three points in the final ten minutes when he pulled a left footed effort wide with just the ‘keeper to beat.

“I thought we’d done it, I thought in might be written in the stars, but let’s be honest, if we’d come away with three points it would have been daylight robbery.”