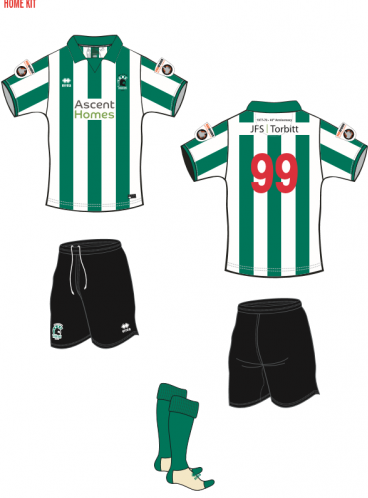 Blyth Spartans are proud to unveil a preview of our new team kit for the Vanarama National League North 2017/18 campaign.

After two seasons with EV2 Sportswear, we are pleased to confirm that we have returned to our former kit and merchandise partners Errea and S08Sportswear.

Spartans general manager Anthony Seghini explained the decision behind the kit: “For next season specifically, we have a shirt design with a traditional 1970s look to commemorate the 40th anniversary of our famous FA Cup run in 1977/78.

“The shirt is modelled on that worn by that legendary team during that season and will include reference to the cup run on the rear of the shirt. To continue the theme, the kit includes green socks, which were also worn that season. “With the away kit – which is always a difficult choice – we have decided to go with something completely different, moving away from the yellow/red and orange of previous years.”

“We love them and we hope you do too.”

Many thanks must go once again to Blyth Spartans Official Supporters Club, who have sourced the kit and supply the team kit to the Football Club as a donation.

A spokesperson for the Supporters Club added: “Don’t worry big lads, we are stocking up to 7XL and can go higher if needed!”

A launch day will be announced as soon as a confirmed date for delivery has been received. However, it is likely to be late July when the replica kit – along with other new lines of club merchandise – will become available in the club store, both at Croft Park and on the online store.