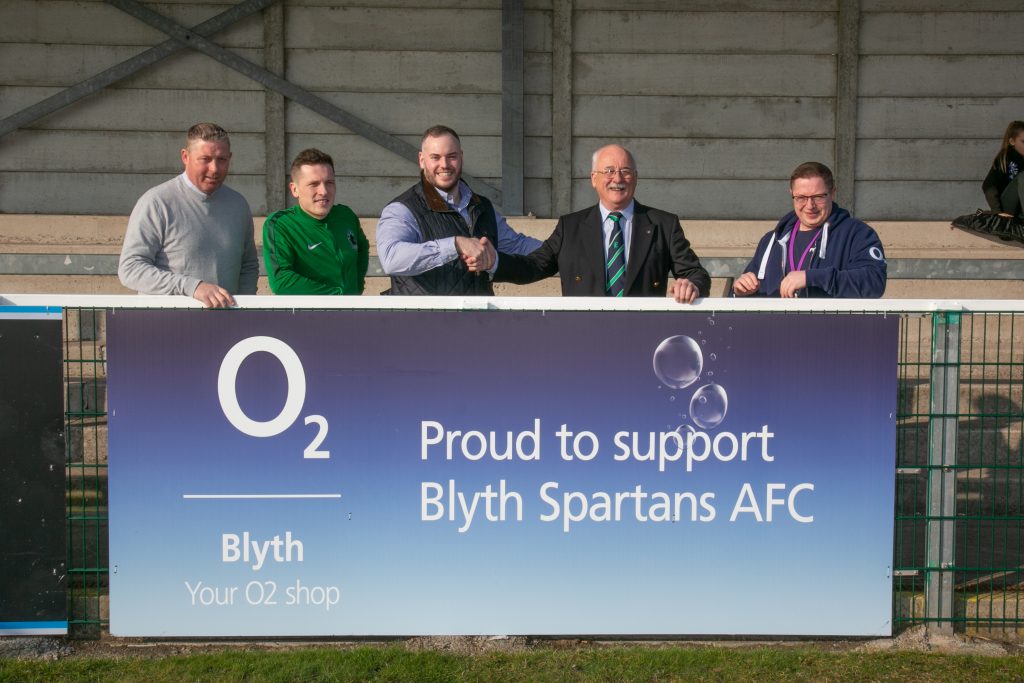 Blyth Spartans have teamed up with O2 in Blyth who will officially be the club’s Digital Strategic Partner for the next 18 months.

O2 have been based in the Keel Row Shopping Centre in Blyth for nearly 12 years and having discussed a strategic partnership for some weeks both parties were delighted with the outcome.

Commercial Director Mark Scott was keen to see an International company such as O2 promoting themselves with the National League North football club.

“We’re delighted to have O2 as a strategic partner of Blyth Spartans. O2 is one of the major players in digital technologies and to have their brand name displayed at Croft Park was something we had no hesitation in agreeing to. As well as the physical advertising presence in the stadium, O2 will be prominent in all our media channels and they have been provided with a number of junior tickets to league games at Croft Park to distribute from their Keel Row shop. We look forward to promoting O2 to the supporters of Blyth Spartans and we hope the relationship continues well beyond the initial agreement to the summer of 2020.”

Head of Sales and Operations for O2 Blyth Chris Tongue has said “We are in support of this partnership. For us to be involved in a great community football club is an honour. We know how passionate people are about their football in the North East and to be able to give something back to the community and it’s youth is a really great opportunity which we couldn’t turn down. We aim to build on the growing success of Blyth not only as a town but a community.

This partnership will add an exciting new dimension and by supporting the local sporting movement, we’re helping more people develop a sporting habit for life. Blyth Spartans have been described as the famous non league club in the world and has always flown the flag for Northumberland and we delighted that we are able to be a part of this and the development of the club.”

O2 Blyth store manager Gary Spooner added “We are a close knit community here and to be able to give something back to the people who need it more than others is very rewarding. We want to continue this and take huge leaps to be able to provide more support for the Trussell trust”.