Blyth Spartans AFC and Blyth Spartans Official Supporters Club are planning a series of events to mark the 40th Anniversary of the historic 1977/78 FA Cup run which saw the Spartans reach a replay in 5th Round proper. This meant they became the first non-league side to take part in the Quarter Final draw since 1914. En-route The Spartans won a record 8 FA Cup matches in one season. This is a record that will more than likely never be beaten.

As part of the celebrations, the club have been granted special permission by the Vanarama National League to wear a commemorative one off kit on the 3rd March v Southport. This is the match closest to the date of 5th Round replay v Wrexham. The kit has been designed by Blyth Spartans Supporters club in association with kit partner Errea. This season’s home shirt had been designed with 1977/78 in mind, but the special one off shirt will be based on the shirts worn by the 77/78 team in the infamous 3-2 victory at Stoke City in the 4th Round. To mirror the shirt as close as possible there will be no sponsor’s logo on the kit. 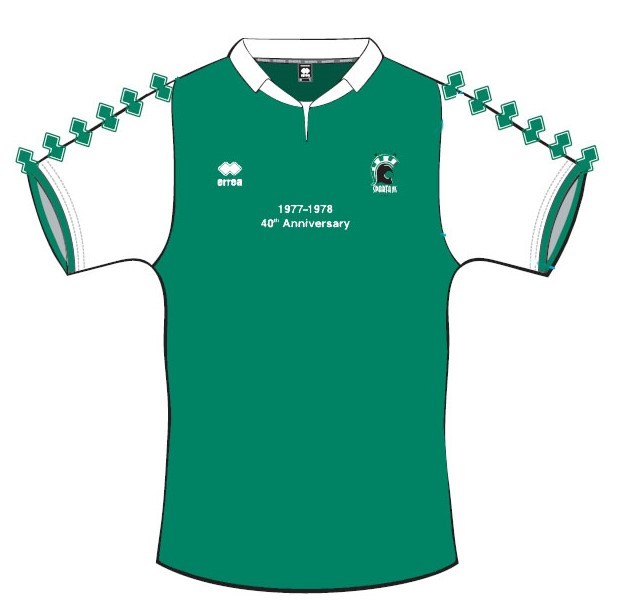 Spartans Fans will have two opportunities to get their hands on this limited edition shirt.

The match day tops worn by the current team during the match v Southport on the 3rd March will be put up for auction. Bids can be made to Anthony Seghini at generalmanager@blythspartans.com leading up to the game or at the concluding auction to be held at a Special Social Event, which will take place in the Social Club (see below), the winning bids will have the shirt presented after the Southport match. The opening date for bidding & details on how to bid will be announced soon.

Otherwise fans can purchase a replica shirt through the Supporters Club for £35 Adults and £30 Children. To ensure the shirts will be delivered in time for the Southport match, orders have to be taken before 9th January 2018. As this is going to be a limited commemorative shirt, a deposit of £10 will be required on ordering with the balance paid on collection of your shirt. Sizes of the shirt will be as per this season’s current home shirt. Orders will be taken in the Club Store, either on a home match day or during the extended Christmas opening hours. Supporters unable to get to the store and wish to buy the commemorative replica can e-mail generalmanager@blythspartans.com

The Social Event will take place on the eve of the Southport game, Friday 2nd March in the Social Club & will involve the squad of the 1977/78 team, along with special guests. The evening will also see the culmination of the auction of the commemorative shirts. The evening will be a celebration of both the historic cup run & the Club’s achievements & progression since that time. Food will also be included in the price of the ticket.

Please keep an eye out on the official club website, social media and local press for further details in relation to the Social Event, ticket details & also other events planned to mark this historic occasion. This will include, during the remainder of the season, former players from the 1977/78 team featuring as guests of honour at various home games.