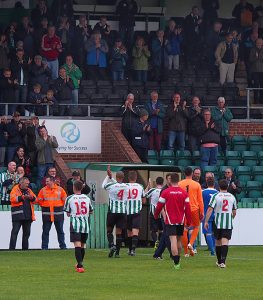 Blyth Spartans manager Tom Wade has held his hands up and admitted that his substitutions nearly cost his side safe progression in their Emirates FA Cup first qualifying round 3-1 win over Frickley Athletic.

A frustrated Spartans side finally broke the deadlock when Sean Reid slotted home in the 54th minute, before he doubled up with a similar finish four minutes later. The man of the match then made way for Jarrett Rivers with 20 minutes to go, just after he missed out on the chance to claim his hat-trick.

Defensive midfielder Matthew Wade was then withdrawn for Michael Richardson five minutes later and the Blyth boss believes that these two decisions allowed the Evo-Stik Premier League’s bottom club to haul themselves back into the tie – as they were able to halve the deficit soon after to set up a nervy last few minutes, before Daniel Maguire sealed the win just before the whistle.

Wade admitted: “We hung on a bit at the end and we shouldn’t have, but that was my fault because I made the wrong substitutions. I’ve learnt a lesson there.

“I took Reidy and Wadey off and I should have kept them both on, but I thought the game was finished. So, I’ve learnt a lesson.”

Despite owning up to an error in judgement on a frustrating afternoon at Croft Park, Wade was still able to celebrate a “great win” and thinks his side could have been out of sight well before Athletic threatened to mount a late comeback.

He added: “We played good football at times. They played five at the back and one in midfield, but we could have been 6-0 up at the break easily.

“We missed some great chances and didn’t play as well as we know we can, but that’s because we were played against such a packed defence and there was nothing we could do about it.

“We’re still miles away from where we need to be, but it’s a great win.

“As long as you’re creating chances, then you don’t have to worry as much. I thought their goalkeeper was man of the match by a long way.

“We have to understand that teams will not come here to try and win a game. They’ll try to nullify us, pack the defence, disrupt our game and get one on the break.

“We have to be a bit more streetwise than that. Second half, we played with a lot more ease and we should have scored a hatful once again.

“We’ve got to start seeing games out though. We played some great stuff, but we’ve got to finish teams off.”

Reid had been named the Port of Blyth Player of the Month for August just prior to Saturday’s game and he showed that he is ready for anyone coming to wrestle the trophy out of his grasp for this month by netting his fourth and fifth goals of the season in similar circumstances.

However, Wade was delighted with the build-up play that led to both goals – as he praised both Stephen Turnbull and captain Robert Dale for their fantastic assists for the opening two goals.

Wade said: “The first and second goals were probably mirror images of each other. We cut them open at will in the second half and it was two great crosses in.

“Every time Robbie had the ball in the second half, he went past their right-back like he wasn’t even there. He didn’t manage to do that in the first half, but he left him for dead throughout the second half.

“They were two great finishes from Reidy as well. He’s also had a good chance to get his hat-trick with a header just over the bar before he was taken off, so he’s unlucky not to have finished off with the match ball.”

Blyth endured a testing time in front of goal – as they were continuously denied by in-form former Poland international goalkeeper Sebastian Malkowski. Although, Wade believes his side should have been awarded two penalties before Reid finally found a way past the Frickley stopper.

Wade explained: “They were both penalties. I was astounded that she didn’t give the one on Maguire, in fact I was stunned.

“Wadey’s had a shot and, fair enough, the lad’s only a couple of yards away. However, he’s saved it with two hands. As I say, I was astounded that they weren’t given, but sometimes you get them and sometimes you don’t.”

Their 3-1 win means that Spartans avoided a tricky midweek replay at Frickley, giving them a full week to prepare for the Evo-Stik Premier League visit of Sutton Coldfield this Saturday.

When asked just how important it was to avoid a replay, Wade replied: “It’s big, because we’ll get the lads on the pitch Tuesday and Thursday and work on our shape and other things that we need to take a look at.

“We’ve got a really good side, a really squad even. I wrote down the seven substitutes for the game and any one of them could have played – in addition to Alex Nicholson and Peter Jeffries, who weren’t available for the game.

“Out of that seven, we could have started any of them and not weakened the side. We’ve never had that since I’ve been at Blyth.

“So, we’ll do some work on the pitch, work on the fitness for the lads who haven’t been getting games and make sure we get ourselves ready for Saturday.

While they successfully avoided a second FA Cup fixture inside four days, Wade was quick to assure supporters that the club is taking the competition seriously again this season – as Spartans want to repay their supporters for their fantastic following with another illustrious cup run.

Wade said: “The FA Cup is important to even club – especially Blyth, given our history in the competition. It puts money in the coffers as well so, the further we go in the FA Cup, the more it benefits the club.

“The supporters deserve it and there was a great crowd in on Saturday, considering it was only the first qualifying round. They deserve another home draw, so I hope we get one.

“It’s an extra game, but I say bring them on. We’d rather play more games than just train so, if we can get a few more FA Cup games fitted in, we’d be delighted to go on another cup run.”