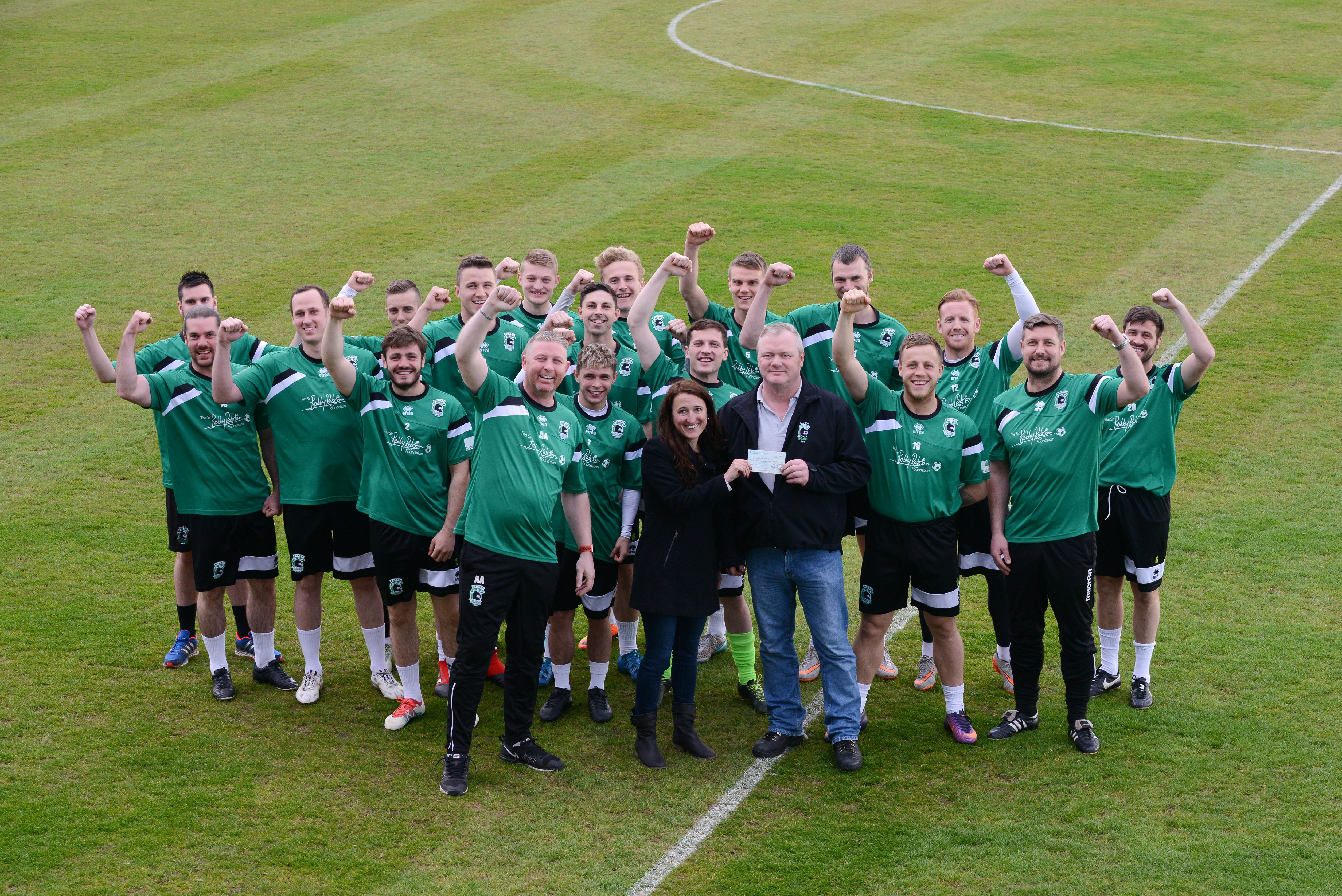 Blyth Spartans Supporters’ Club have raised a fantastic sum of £350 for the Sir Bobby Robson Foundation, through the sale of the club’s training tops this season.

Supporters’ Club member John Parker was on hand to present the cheque to the foundation’s PR representative Liz Luff at Croft Park on Thursday night, for the latest fundraising effort that they have completed on behalf of the club.

The donation – made up completely from sales of the training shirts, which have the Sir Bobby Robson Foundation logo on the front of them – means the club has now helped support the charity for the last three years and it’s an association that the foundation admit they are lucky to be a part of.

“We’re very lucky to enjoy a really good relationship with Blyth Spartans, which we value greatly,” Liz said. “We’ve had support from the club for the last three seasons and it’s something that’s very special for us.

“We didn’t choose Blyth Spartans, they chose us and we were honoured when the club contacted us. It means a lot to see the team warming up with our logo on their training shirts.

“I also think we’ve been fortunate to be involved with the club during a special time in its history, with the FA Cup and then the double-winning season this year. It’s been fantastic for us to be involved with Blyth and we’re very proud to be even just a small part of that.”

Taking place ahead of training, the Blyth Spartans players and management were also able to show their support for the foundation – which has raised over £10m to help find more effective ways to detect and treat cancer, since its launch in 2008 – and Alun was full of praise for the Supporters’ Club and the fans that bought the shirts throughout the season.

Alun stated: “It’s brilliant that the Supporters’ Club are able to hand that amount over. Obviously, for a club like Blyth Spartans to be able to give something back to the Sir Bobby Robson Foundation in this way is outstanding.

“The lads had the tops on for the photos and it’s a great foundation. Everyone knows who Sir Bobby Robson was; he’s from the North East and he was absolutely brilliant.

“You could probably call him Mr Football, when you look at some of the teams he managed and what he did with them. He really looked after his players – as I know some of the lads that played under him at Newcastle and they were really well looked after by him.

“I wasn’t fortunate enough to play under Bobby, but I did play against his sides a couple of times. I was also at Ipswich Town and he was one of the most well-thought of men ever down there.

“It’s great that the Supporters’ Club have been able to give something back to a fantastic foundation like that.” 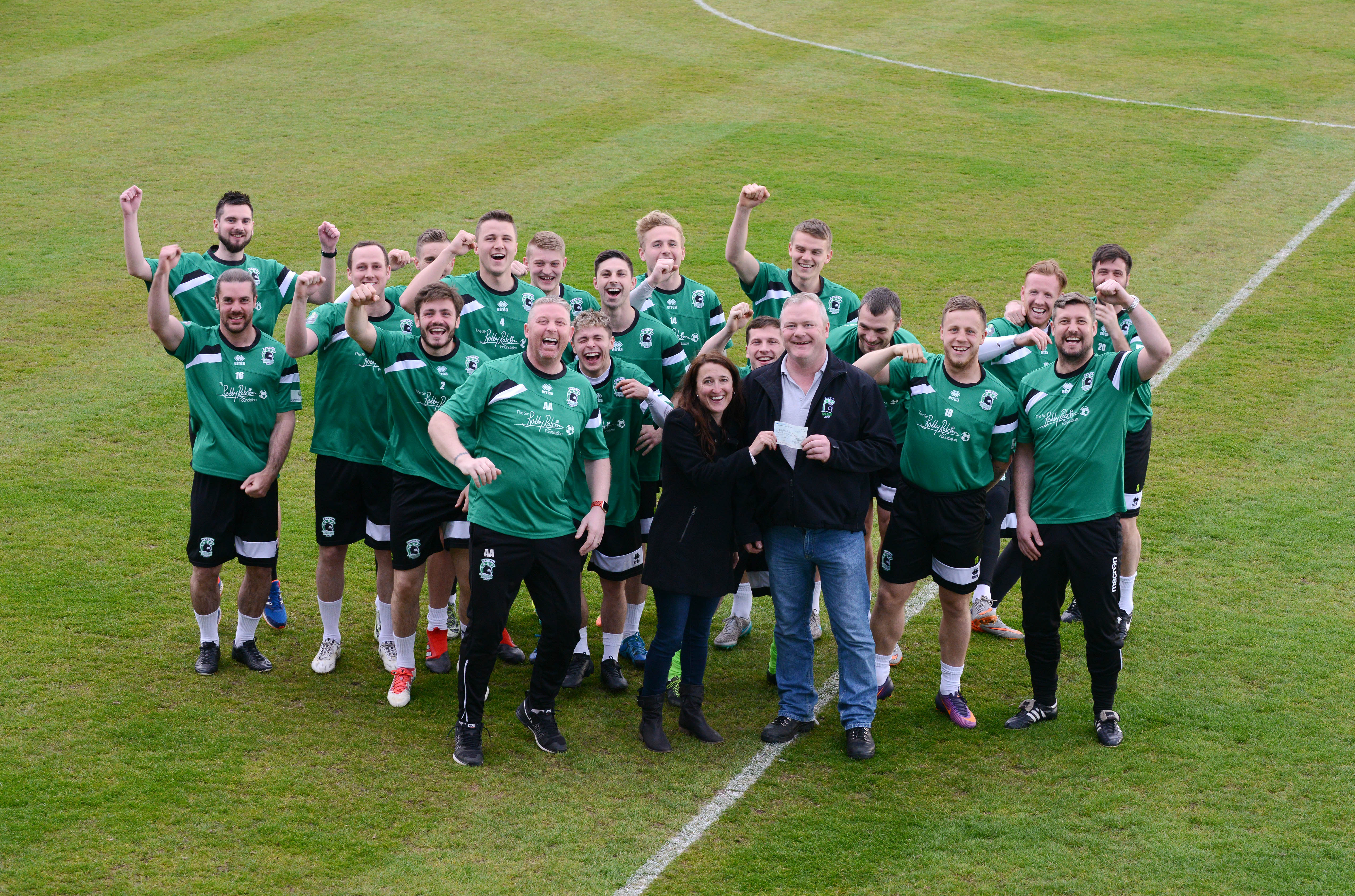 General Manager Ian Evans was also quick to applaud the efforts of the Supporters’ Club, before going on to suggest that this wouldn’t be the last time the Evo-Stik Premier League champions would be supporting the charity that the former England, Barcelona and Newcastle United manager spent his final 18 months building up.

“Following on from what we’ve done in previous years, it’s supporting a good cause and it’s nice to be associated with the Sir Bobby Robson Foundation,” Ian said. “Obviously, we have to admit that a lot of our fans are also Newcastle United fans, so there’s that link as well.

“We met Bobby Robson at one of the NFA dinners and what a nice bloke he was. Everybody just seemed to love him, so to be associated with him – and the work his charity is doing – it’s a huge plus for the club.

“As we always seem to find out at Blyth Spartans, we’re always doing something different and we’ve always got something on the go. In this instance though, it’s nice to support such a cause and that will no doubt continue next season.

“The Supporters’ Club have done well as well, getting the sales up. I think last year raised £500 or more, but that was the launch of the training kit – and I think most of the guys have still got the original shirts that they bought then – so we might have to think of another way to help raise more money for the Sir Bobby Robson Foundation.”

Ian’s comments will no doubt please everyone connected to the Sir Bobby Robson Foundation – as a grateful Liz revealed just how “proud” the hard-working charity of their partnership with the newly promoted Vanarama National League North side.

Liz added: “If Blyth were happy to continue the relationship, we would be very happy to carry it on. It means a lot, whenever we receive help for a club, an individual or anyone.

“We’re an NHS charity, which means we don’t have any professional fundraisers or anything like that. We rely solely on people coming to us and telling us that they want to support us.

“We’re always grateful whenever someone gives us their support, but it’s more special when clubs like Blyth come to us and build up a strong bond. The club has come back to us year after year and it feels almost established at this point.

“We hope that Spartans would like to continue working with us – as, certainly from our end, it’s an association we’re immensely proud of.”

For more information on the Sir Bobby Robson Foundation and the work they do – and to find out how you can make a donation – please visit http://sirbobbyrobsonfoundation.org.uk/.