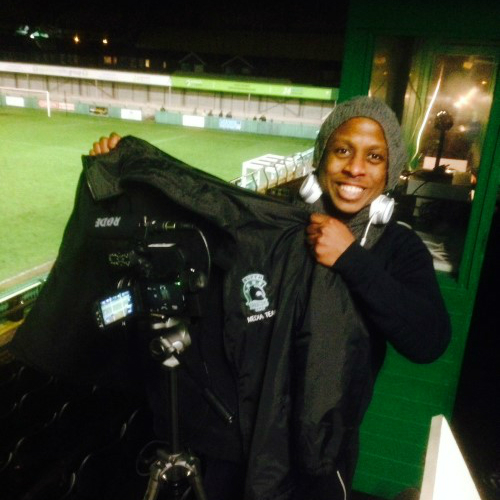 BSAFCTV cameraman Clinton Forde has decided to step down from his role on the Blyth Spartans media team.

Clinton joined the club while studying for a masters degree in sports journalism at the University of Sunderland last season to work on the Spartans’ TV channel but, unfortunately, he is unable to commit to the club for another season – as the Newcastle United season ticket holder has been given a job by ITV Tyne Tees as a production assistant to cover news and sport.

Spartans’ Media Manager Phil Castiaux revealed his disappointment at losing Clinton from his team, but insisted that a replacement cameraman has already been found by the club.

Phil said: “Unfortunately, Clinton is unable to commit himself to comprehensive Spartans TV work again this season. He produced some excellent work for the club and we’ll miss him and his infectious smile!

“Blyth supporter William Reynolds has very kindly offered to to take over the reigns on BSAFCTV, at least for the time being, so we’ll still have content to go out on the channel.”