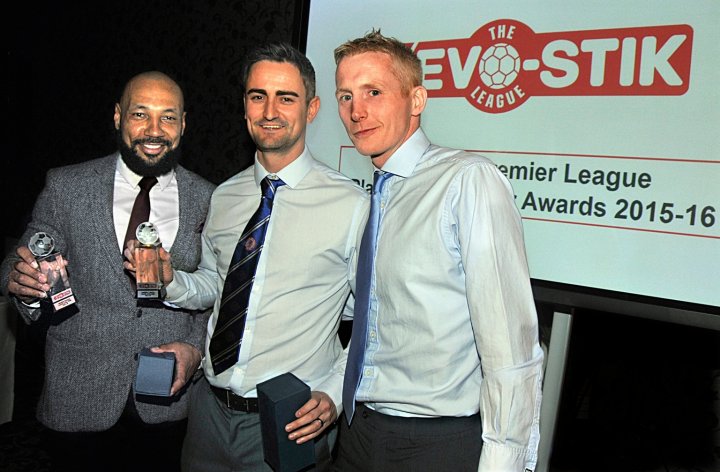 Blyth Spartans fans have less than 48 hours left to vote for their best player of the 2016/17 season.

The deadline to choose the finalists for the newly sponsored EVO-STIK NPL Show Supporters’ Player of the Year passes at a minute to midnight on Thursday February 16.

Like former Stourbridge striker Karl Hawley who collected the coveted accolade last term, this season’s winner will be crowned at the sixth annual EVO-STIK NPL Players of the Year Awards in April after an exclusive online poll of fans kicks off in March.

More than 3000 votes were cast for more than 100 nominations last season before Hawley beat Spartans’ very own Robert Dale and Ciaran Kilheeney of Warrington Town to the coveted honour, which will be presented this season by Welsh footballing legend Dean Saunders when the awards return to the plush Brooklands Holiday Inn near Barnsley on Sunday April 9.

As guest of honour, the Welsh international is following in the footsteps of Mansfield Town manager Steve Evans last season, England C manager Paul Fairclough the year before, Manchester City and Everton legend Joe Royle in 2014, former Wales boss Brian Flynn in 2013 and World Cup referee Howard Webb at the inaugural awards at the four-star venue in 2012.

Unique in the top levels of Non-League football with the focus on the players and the winners chosen by the EVO-STIK NPL’s managers and fans, the now annual awards are the brainchild of former Manchester City keeper and Evo-Stik NPL stalwart Alan Ogley.

More than 300 guests are expected to join Saunders at the glittering awards night – after the managers choose their divisional teams of the season and name their three players and young players of the year in March.

After attending the event for the first time last season and collecting their own accolades from then Leeds United boss Evans, the EVO-STIK NPL’s next generation of stars from the NPL Football Academy will be on stage again to be honoured.

1. Fans are only able to nominate via one method. Any other nominations, or nominations that do not meet the rules will not be counted.
2. Fans may nominate up to three players. However, they may only nominate one player from any member club (including players from the NPLFA) and can only nominate via one method of media.
3. Nominated players must be active in the EVO-STIK NPL at the time of the nominations period.
4. Players who have joined a club on Short Term Loan, Youth Loan, Emergency Loan, or Work Experience are ineligible for an award unless they have joined from another team in the EVO-STIK NPL.
5. Players who are dual registered to play in the EVO-STIK NPL or are on long term loans (ie more than 93 days) are eligible for the awards providing that they are not recalled to the parent club during the nominations and voting period.
6. NPL Academy players are eligible for the awards providing they have played one first team match in the EVO-STIK NPL, FA Cup, FA Trophy or Integro Doodson Sports Cup this season.
7. Players are not allowed to nominate themselves.
8. Any player currently suspended by the FA for any incident not relating to a matchday (Breach of FA Betting Rules for example) cannot be nominated due to the terms of the suspension.
9. Players who are serving bans for dismissals or an accumulation of bookings are eligible for the awards.