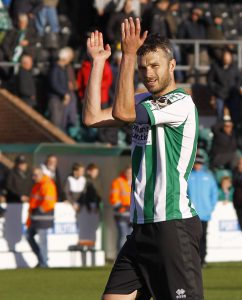 Just three points separated Alun Armstrong’s men to their hosts prior to kick-off, however Dale’s magical piece of intelligence on 52 minutes proved the crucial difference.

Spartans, in the process, recorded their first National League North away win since February to hold a three-point advantage over the relegation places.

Armstrong made three changes from the team that suffered a harsh defeat to York City in the FA Cup last weekend.

Southport carved out the better of the few first-half opportunities as Peter Jameson was called into immediate action to deny Dion Charles with just one minute on the clock.

Charles attempted to test Jameson once more on 15 minutes but in similar vein to Jack Sampson, he failed to hit the target from outside the area.

Two minutes later, Spartans registered their opening shot on goal when Dan Maguire raced into The Ports’ box – his resulting effort requiring a fine low save from Dan Hanford.

Shortly after David Morgan sent a shot wide from 25-yards, Sampson and Charles combined – with the latter thwarted by Jameson for the second time in the opening half-hour as the game slowed down going into the break.

Half chances did follow for Spartans, though. Connor Oliver curled a free-kick wide on 41 minutes while Dale also struck off target from open play from a similar position.

Ryan Astles turned a shot past the post soon after the interval and Charles was kept at bay by Jameson for a third time before Armstrong’s side got their noses in front.

Dale, in spectacular fashion, witnessed his in-swinging corner beat former Gateshead keeper Hanford, much to the delight of the 59 travelling Green Army.

It had taken 12 minutes for the hosts to respond and bring Jameson back into action when a corner fell into the path of Astles.

Up the other end, Maguire looked to extend Spartans’ advantage, striking low towards Hanford’s near post and forcing a solid reflex save.

In truth, Southport barely threatened until the closing stages – where Spartans were finally made to work for their win.

Jameson, as he has all season, rose to the challenge for Blyth.

Jordan Richards delivered his corner onto the head of Dean Winnard but Jameson was on hand to tip the head over.

David Morgan then let fly a fierce effort from 20 yards, and Jameson terrifically clawed it away from danger.

Five minutes were signalled by the fourth official and substitute Jason Gilchrist had a gaping opportunity to level with virtually the last kick of the game.

The striker created space for a shot from inside the area but lacked the accuracy and thankfully curled it wide of the Blyth upright.

Armstrong’s men travelled back to the North East occupying 17th in the league table with just one defeat in their last five games.

It’s a quick turnaround for Spartans, who make the ‘short’ trip to Guiseley on Tuesday evening.

Spartans Man of the Match: TBC