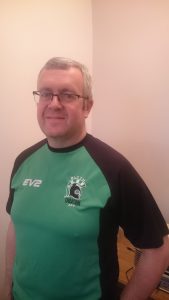 In the first of our rank and file pieces that previously featured in our match programmes, Phil Castiaux caught up with Supporters Club Chairman and soon-to-be club General Manager Anthony Seghini.

First Ant tell me a little about yourself.

Well, I’m 52 now and have recently taken early retirement from the banking business. My first Spartans game was in the early 70s. I remember a friendly against Leeds United and the FA Cup tie in 1974 with Preston North End at Croft Park. They’re my earliest memories of supporting the Spartans. I actually love most sports and enjoy watching the England cricket team and big golf tournaments. I like music too, mostly punk and I get to as many gigs as possible and I’ve started going to the gym and am training for a marathon in October.

So, what are the volunteer roles you’ve undertaken at the club?

My first role was working behind the bar in the Sponsors Lounge with a colleague then, about 15 years ago, when Tom Sawyer left I took over as Treasurer with the Supporters Club. A few years back when a few changes were taking place in the Supporters Club I took on the Chairmanship while continuing to be Treasurer as well.

Tell me about what you and your colleagues get involved with on match days and beyond.

Ok, we get to Croft Park at about noon to get the shop ready for the day ahead. We make sure the flag is up and we help maintain the toilets so we make sure they’re clean and ready to be used. We also check any orders received for memorabilia which have come through via the on-line shop and we put them up ready to go out in the post. We stock the shelves and we open the shop before the kick-off, at half time and after the final whistle.

We’re always looking for new kinds of merchandise; new ranges, new variety. We really appreciate fans buying in the shop. All the money we raise goes to the football club at the end of the day.

We also sell Programmes on match days. The Programme isn’t actually part of our remit but we like to help the club out. After the match we do a thorough litter pick of the ground so it’s tidy and ready before the next game.

During the week, we monitor on-line shopping and as we like to get orders out within a couple of days so if something comes in one of us will get down to the ground to sort it out rather than delay things till the next home fixture. We always try to meet supporters’ needs.

Other things we do include events like the stall we had at the Tall Ships Race and we hope to do something similar at this year’s Maritime Festival. We have our Committee meetings, maybe once a month, during the week as it’s too busy on match days.

We tried to get transport to away games up and running in the last couple of seasons but we are reliant on sufficient numbers and cannot afford to make a loss. A couple of supporters do a really good job running away travel now and again.

What does the future hold for you and the Supporters Club?

Well, we’re down on numbers in terms of the Committee; there are about half a dozen of us so we’re after new blood. It’s a great opportunity to really feel part of the football club. We need new

bodies as new bodies bring new ideas. You can get in to a situation where you settle in to how things have always been done so new ideas are always welcome.

In terms of myself I’m going to take on the General Manager role from Ian Evans next season but I’ll stay on as Supporters Club Treasurer but I won’t have the input to the shop which I’ve had. My main focus will be elsewhere. So there is another reason we need new people on board.

Finally, do you think we’ll get promoted this season?

Without a doubt! I think this season is different to last, we’re in a stronger position and I don’t think we’re going to falter.