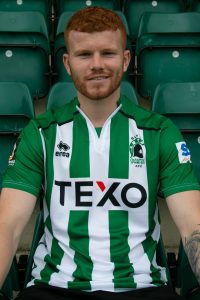 Devitt joined in the summer of 2019 as the squad was overhauled by Lee Clark after a turbulent summer. A central defender by trade, Devitt has all the characteristics to be a focal point of the Spartans back line.

He spent the 2018/19 season playing in the National League with Gateshead making 20 appearances – this after returning from the US after a spell at Lionsbridge.