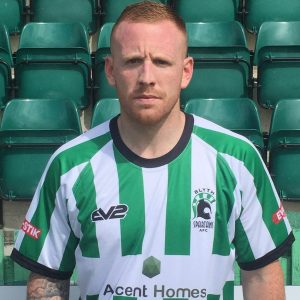 Blyth’s Matty Pattison revealed his joy at opening his Spartans account with a superb free-kick – as he grabbed two goals in Saturday’s 5-0 win over Halesowen Town.

The former Newcastle United midfielder broke the deadlock in the 24th minute with a sublime 25-yard set-piece, which curled into the top corner and left Halesowen keeper Daniel Platt totally helpless between the sticks.

However, despite producing a moment of magic to score his first goal for the club, the ex-South African international insisted that he’d have been just as happy to score any type of goal.

Pattison said: “Obviously, it was in a good position for me on my side of the pitch and it was perfectly suited for a left footer. I thought I’d have a crack and, luckily, it went in.

“I’m very happy to have opened my Spartans account. It doesn’t matter which way it goes in as long as it goes in, but I was more than happy with the free-kick, the result and the performance as a whole.”

The free-kick drew obvious comparisons with Stephen Turnbull’s famous effort in the FA Cup win at Hartlepool United back in December 2014, but a modest Pattison believes that Turnbull’s was the better finish.

When asked if Turnbull had reminded him of his famous free-kick after he’d scored, Pattison said: “To be fair, he didn’t mention it. A couple of the other lads did, but he didn’t bring it up.

“Mine was further out but, when you take the occasion into account, I think I’d definitely go for his.”

Striker Daniel Maguire also scored twice, but was unlucky not to score a hat-trick at Halesowen – as he hit the post late on after scoring a brace for the second successive Saturday. Despite seeing his teammate missing out on the match ball, Pattison was still full of praise for ‘Nipa’ and his killer instinct in front of goal.

He said: “I didn’t know much about Danny before I arrived at the club, but he definitely has an eye for goal and he’s a great finisher. He showed in games and in training that he knows where the goal is and he’s started the season very well.

“Hopefully, he can get even more this season and really help push us on.”

Spartans now welcome unbeaten league leaders Ashton United at Croft Park on Tuesday night, but Pattison has called on the hosts to make their home advantage count in what should be a close game between last season’s beaten Evo-Stik Premier Division playoff semi-finalists.

Pattison said: I’m sure it’s going to be a tough game, but we’ll be at home. We have to show what we’re about and stamp our authority on proceedings at our ground.

“We need to keep doing what we did so well at Halesowen, keep possession and make them work for it. Hopefully, we can score some more goals as well.”