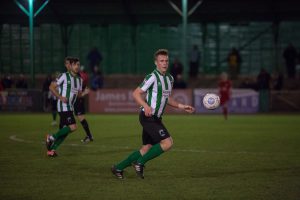 Blyth Spartans can confirm Gateshead have recalled Kieran Green from his loan spell.

The midfielder impressed whilst on loan at Croft Park where he made a total of eight appearances.

His only goal for the club came in the Boxing Day defeat at home to Spennymoor Town before the reverse fixture, five days later, proved to be his last appearance.

Spartans would like to thank Kieran for his efforts and wish him well for the future.