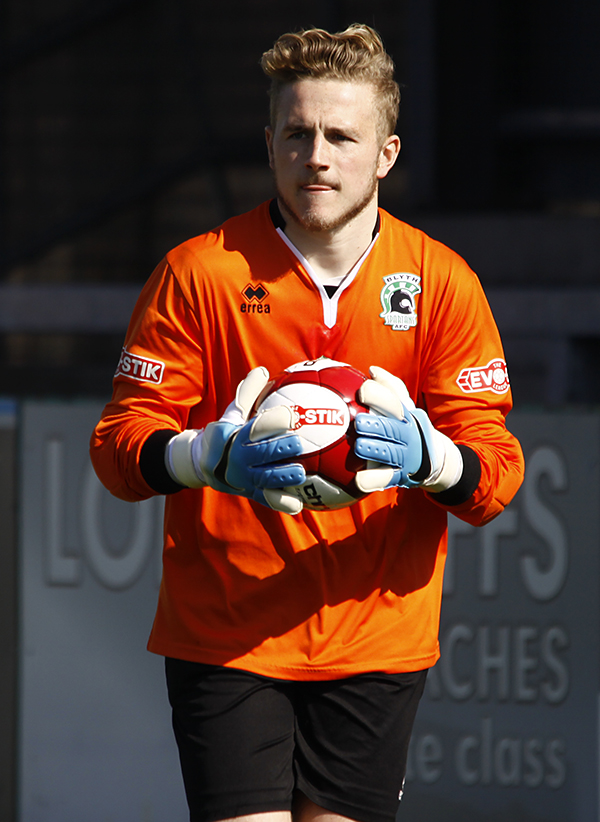 On-loan Newcastle United goalkeeper Paul Woolston revealed it would be “brilliant” if he could stay at Croft Park next season – as he has “loved every second” of his time at Blyth Spartans.

The 18-year-old shot stopper arrived at the club back in November 2016 and provided a safe pair of hands between the sticks for the following six months – as Spartans went on to claim the Evo-Stik Premier League title at a canter, finishing the season on 101 points.

Woolston’s loan spell will end with a return to the home of the Magpies – who celebrated a promotion of their own with a 4-1 win over Preston North End earning them a return to the Premier League earlier this week – as Blyth take on North Shields in the Techflow Group Northumberland Senior Cup on Wednesday.

However, after developing a real affinity with Spartans during his loan spell, the youngster would “happily come back” to the club for a second spell next season if Blyth and Newcastle could agree terms again.

Woolston said: “I think next season will be another year of development for me so, if Blyth said they wanted me to come back and do what I’ve done this season – in terms of training with Newcastle more or less every day, train with Blyth and then play on a Saturday or Tuesday – then that would be brilliant.

“If everyone wants it, then I would happily come back – as next season is going to be another challenge. It’ll be tougher, because most of the teams are going to have big lads up top with long throw-ins etc, so it’s going to be more physical and another learning curve for me.

“Blyth have enough to cope with that though. We just have wait until pre-season to see who comes and who goes, but I know the group of lads here will more than step up the plate next season.”

The keeper – who featured for Darlington 1883 for a short spell before joining Blyth – also admitted that he wasn’t expecting to win the league upon his arrival in Northumberland, but picked up on the drive and hunger within the Spartans’ dressing room almost instantly.

He added: “I wasn’t expecting to be lifting the trophy when I joined, but – as soon as I arrived – I could see that the club wanted to achieve and go up to the next level. I knew I could only try my best to try and help them with that.

“Since I walked through the door, the lads and everyone else have been class with me. The way we have played this season – especially during that [12-game winning] streak after Christmas – has been brilliant and it’s helped us to get to a level we want to be at.”

Woolston went on to be an almost ever-present name on Alun Armstrong’s team sheet after keeping a clean sheet on his debut – a 2-0 win away at Barwell – and he is delighted with just how much of a contribution he has made to Spartans’ title-winning season.

The youngster stated: “It’s been a brilliant season for me on an individual level as well. If I had sat down at the back end of last season and someone had said that I’m going to play more or less 40 games of senior football, I’d have snapped their hand off.

“You soon find out if you’re not doing enough though – as they’re soon on your back, especially in goal!

“We’re at that next level now though so – hopefully – we don’t become a yo-yo club, which I don’t think we will. We’ve got people here who will only take the club onto bigger and better things.”

Asked if he felt a mix of emotions after the game, Woolston replied: “Yes, massively. I’ve loved every second since I arrived here.

“I love the fans and how welcoming they’ve been, everyone inside the club and the whole experience of playing for Blyth Spartans – as I knew how big they were, from watching them in the FA Cup two seasons ago.

“Being a part of history this time, in winning the league and passing the 100 mark – as well as some fans saying I’ll be remembered here for a long time – is a very special feeling and one that will stay with me forever.”

In a strange coincidence, Woolston’s final game for Spartans will take place at St James’ Park – as Newcastle’s ground plays host to the Techflow Group Northumberland Senior Cup final on Wednesday night (7:30pm kick off.) Spartans take on North Shields in a repeat of last year’s final, but the goalkeeper is hoping for a different outcome when he walks out on his home ground with a Spartans shirt on.

Woolston said: “It won’t be any different for me really, playing there for Blyth – as I’m used to the surroundings and I’m used to the pitch, so I’m hoping that will help. For us, the aim is to go up with another trophy and complete the double.

“That’s what everyone wants, especially since it’s North Shields and they did us in the final last season. There’s a bit of payback to be done there really, but it’ll still be a massive task trying to get past Shields.

“They’re a decent team and they’ve done really well in the Northern League this season. It’ll be a tough game but, if we turn up, then I’m sure we’ll be ok.”