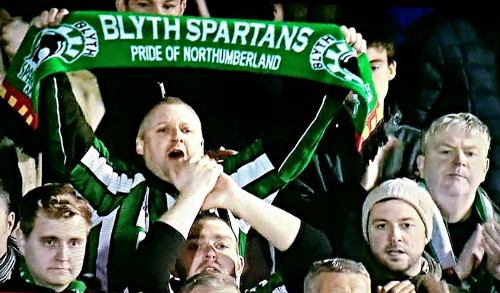 Former Programme Editor Glen Maxwell has returned to Blyth Spartans to take over as the club’s new Press Officer.

Glen – who was part of the club’s media team that won the Evo-Stik League Public Relations Club of the Year award for the 2012/13 season – also launched the highly successful BSAFCTV YouTube channel in the summer of 2013. He worked in a number of other roles during his two-and-a-half-year stay at Croft Park, before moving on to work full-time as a content writer and social media administrator for a sports betting company in November 2013.

However, the opportunity arose for Glen to come back to the club earlier this month and he will now be producing match reports, match previews and other content for the club’s website, much to the delight of the life-long Spartans supporter.

Glen said: “It’s great to be back at Blyth Spartans again. I really enjoyed working for the club when I was here before and it already feels like I’ve never been away.

“I’m really impressed with the new website and I think it makes the club’s output look even more professional. The media team has gone from strength to strength during the time I’ve been away and, although there seems to have been a few departures from last season, I’m sure we’ll still be able to continue to deliver the top quality content that Spartans supporters have come to expect in recent years.”

The University of Sunderland sports journalism graduate – pictured above with his hands above his head after Blyth’s FA Cup Third Round defeat to Championship side Birmingham City – has already covered the club’s first two games of the Evo-Stik Premier Division season and he has been overwhelmed with the reception that his work has received so far.

Glen added: “The game against Coalville Town saw me write my first proper match report for about three or four years, so to say I was rusty would be an understatement! However, it’s great to see all of the positive comments from supporters on social media and the welcome I have received from everyone associated with Spartans has left me in no doubt that I’ve made the right decision to return as Press Officer.”

Media manager Phil Castiaux gave Glen the opportunity to work for the club during his first spell at Blyth and he is looking forward to working alongside the 27-year-old once more.

Phil said: “It’s great to welcome Glen back to the media team again.

“He did a great job when he was at Croft Park a few years ago and I’m sure he will again. He is a versatile journalist, who can contribute across the board.”