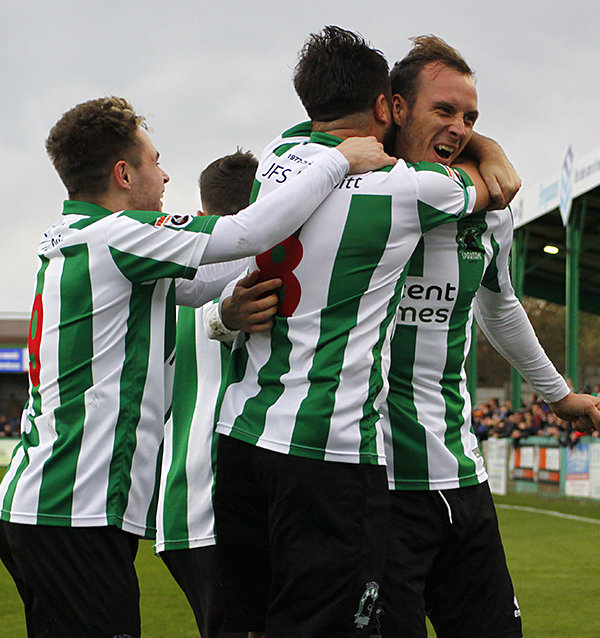 A duo of dubious penalties before the half-hour markn saw both Sean Reid and then Jon Parkin score from the spot, before Adam Wrightson put the visitors ahead on 36 minutes.

Greg Rutherford then made it 3-1 to Blyth, but Parkin’s second on 87 minutes threatened to inspire a late fightback for the full-time outfit. However, Spartans saw out the final few nervy minutes to exact revenge for their Vanarama National League defeat to the Minsterman back in August.

Alun Armstrong had to do without the services of Daniel Maguire and Dale Hopson, so made four changes from Tuesday’s Buildbase FA Trophy triumph over AFC Telford United. Rutherford and Kieran Green were deployed as the prolific goalscoring pair’s replacements, while Peter Jameson and Michael Liddle also returned to the starting lineup.

Liam Gallagher’s Wall of Glass featured in the pre-match playlist and seemed to be an ode to York’s defence in the third minute – as a fantastic lofted through ball from Robert Dale released left-back Liddle and reduced the York defence to pieces. Liddle crossed in, but Hamza Bencherif dug his teammates out of trouble with a clearance inside the area.

City’s Aman Morgan-Smith raced into the box two minutes later, with Ryan Hutchinson following up. The striker fell over in the box to muted penalty shouts from the crowd – as ‘Hutchy’ calmly took the ball away from goal.

Dale had the ball back up at the right end of the pitch for Blyth within 60 seconds, during what was a frantic end-to-end start to the festive encounter. His shot went just wide, but it nearly turned into a perfect cross for Reid – as he was inches away from heading it home.

Reid tried to get onto another Dale cross – this time from a wide free kick – on nine minutes, but former Spartan Adam Bartlett punched the ball clear. The follow up ended up at the feet of Green, but his long-range drive was deflected behind for a corner.

Jarrett Rivers dinked a neat cross in from the other side moments later, looking for the head of Rutherford at the back post. Bencherif was there again to glance a header away and thwart the former Berwick Rangers striker.

Armstrong’s men were continue to fashion chances in what was becoming a fruitful spell for the away side. Atkinson was next to go close after a bursting run forward with 11 minutes gone, but his shot was blocked away by Adriano Moke before Bartlett was called into action.

Their inability to score from their early chances came back to hurt Blyth soon after though – as Aidan Connelly broke through their backline and had the goal at his mercy. A horrendous touch took the chance away from him though, with Jameson able to come and claim the ball.

Hutchinson’s game ended early through injury on 14 minutes, which saw Wrightson take to the field behind Rutherford and Reid drop back into the gap in defence.

With 23 minutes gone, City went close again – following an intricate free kick routine. The ball bobbled out to Alex Pattison at the edge of the area, but his shot fizzed just wide of the upright.

The swelled 390-strong travelling Spartan army soon had smiles on their faces when Dale was adjudged to have been brought down by Daniel Rowe in the box on 24 minutes. With penalty king Hopson absent, Reid stepped up to send Bartlett the wrong way.

If that debatable penalty was an early Christmas present from referee John Matthews for Blyth, then York were given their’s just four minutes later – as Connolly vaulted over the sliding challenge of Nathan Buddle and threw himself to the floor. Parkin emulated Reid by smashing his penalty home, with Jameson diving the other way.

The game would remain level for all of six minutes though, when Spartans raced – quite literally – into a 2-1 lead.

Green placed a pin-point ball through that released substitute Wrightson. The pacey winger sprinted into the area and dinked the ball over an advancing Bartlett, before wheeling off to celebrate as the ball nestled into the bottom right corner of the goal.

Wrightson was so close to turning provider in the last minute of the first half, when he fizzed in a ball across the face of goal. Rutherford tried his best to get the necessary touch to turn it in, but was unable to put Spartans further ahead.

The visiting dugout might have cursed their luck at that chance, but they were wiping their brows in the first minute of stoppage time before the break – as Amari Morgan-Smith broke through Blyth’s defence and slotted the ball calmly past Jameson. However, he could only watch in disbelief as the ball bounced off the foot of the post and he fluffed his rebound attempt under pressure from Buddle and Reid.

Bartlett nearly gave his former club a gift of his own on 50 minutes, when Bencherif played a routine ball back to him. He got his clearance all wrong and the ball looped up into the air near to a waiting Wrightson, but the keeper was able to get to it first and spare his blushes.

Green then tried his luck from 20 yards out six minutes later, but he didn’t get enough on his low shot and Bartlett was able to get down and save it with minimal fuss.

Parkin had two good chances to put York back on terms within three minutes, but didn’t show the sort of composure that would be expected of a former Football League forward when he blazed over on 56 minutes – as an earlier foul on Buddle spared his blushes somewhat. He then got on the end of a cross on the hour mark and let the ball run up off his body and high into the air just yards out, much to the amusement of the travelling band of Spartans supporters behind the goal.

Parkin might have fared better with an assist on 67 minutes, when his heavy touch saw the ball run to Connolly. The winger tried a speculative shot from distance, but it was well of target.

The York defence obviously fancied an early finish for the festive period – as they switched off while calling for a foul on 72 minutes, which allowed Rutherford to advance towards goal. The striker shot low under Bartlett, who got a weak touch on the ball but it wasn’t enough to stop it trickling over the line.

Rutherford nearly doubled up four minutes later, when he got into the area once again. After turning Bencherif and Jonny Burn inside and out, the two defenders managed to get a block in between them to divert his shot behind.

Rivers was then found in space in the area after another lapse in concentration from City’s backline. However, Bartlett spread himself well to thwart the winger and save well at his feet.

York gave themselves a lifeline with a simple ball forward with three minutes remaining. Parkin took the ball down well and slotted the ball into the legs of Jameson, but was able to side-foot into an empty net at the second attempt.

With the game heading into the 90th minute, Dale unleashed what looked to be an unstoppable effort from the left. Bartlett was well-beaten by the strike, but he had the far post to thank for denying the Spartans captain what would be just another memorable goal for him.

The home support thought their side had levelled up moments later, when Connolly had the Blyth net shaking. However, his shot had just evaded the left upright and hit the side netting only.

With what was the last action of the game, a cross was played in looking for Parkin at the back post. With everyone drawing breath at what was an expected equaliser, Atkinson headed the ball behind to secure a memorable win for Spartans.

Blyth won’t have long to enjoy their latest win though – as they welcome Spennymoor Town to Croft Park for a 3pm kick off on Boxing Day.