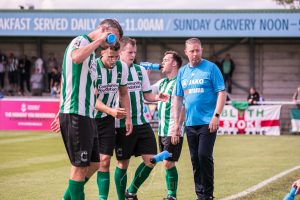 Blyth Spartans drew for only the third time this year – throwing their bodies on the line to deny Darlington a second-half winner and earn a point their commitment merited.

There was perhaps an element of luck to Alun Armstrong’s side dogged performance as the second period saw both Stephen Thompson and Reece Styche hit the woodwork.

However, no one could fault the visitors as they dug deep to withstand Quakers’ pressure – epitomised by Nathan Buddle’s terrific goal-line clearance to deny Tom Elliott.

It was end-to-end stuff in the first-half as Dan Maguire fired Spartans in front after just four minutes.

The Quakers finished the opening 45 minutes strongly, as Styche, who witnessed a goal disallowed in both halves, equalised a few minutes before the break as the two sides shared the spoils.

Armstrong was forced into two changes from the side that beat Chester 8-1 on Saturday. Robbie Dale and Michael Liddle, were replaced by Ian Watson and Connor Oliver.

And in place of the injured Dale, Maguire captained Blyth at Blackwell Meadows, and led by example – opening the scoring early on.

A ball driven along the floor by Aaron Cunningham found the attacker in acres of space before he laced the ball past the diving Jonathan Maddison into the right side of the net.

Maguire again created a decent opening – cutting inside on the left side of the penalty area, though the delay in the shot allowed a Quakers defender to intercept.

Moments later, the hosts’ defence stood still as Oliver’s in-swinging cross was met by Jarrett Rivers at the back post but Maddison claimed the tame header.

After riding out the early Spartans storm, the hosts inflicted a few heart-in-mouth moments on their visitors – all dictated by their ever-dangerous front three – Simon Ainge, Styche and Thompson.

Firstly, from 40 yards out, Thompson spotted Jameson off his line on 22 minutes only to be denied by the crossbar before Styche failed to hit the target with the follow-up.

Less than a few minutes later, Styche thought he had equalised when Jameson fumbled Ainge’s shot. Fortunately for the Spartans number one, the offside flag came to his rescue.

Jamie Holmes shortly hit the side netting, and just as Oliver fired one over from 20 yards out, Jameson made amends for his earlier blip – denying Styche one-on-one with his knees.

On the balance of play, Darlington probably deserved to go into half-time all-square, and did so when forwards Ainge and Styche combined – with the latter finishing off the move.

The home side pushed to go one better on the stroke of the interval but Spartans were rightly spared as Thompson fired inches wide of the bottom right corner after fooling Ian Watson with his stepovers.

The opening stages of the second-half were much like the first – Holmes should have done better with his shot after cutting inside on the left-hand side. It was almost de-ja-vu minutes later as Thompson did the same.

On 55 minutes, Maguire registered Blyth’s last effort on Maddison’s goal for some time as Darlington began to pile on the pressure.

Styche let rip from 25-yards but his shot cannoned back out off the post before later on, the officials cut his celebrations short for a second time. The Darlo forward was spotted using his arm to deflect Elliott’s effort past a load of bodies and Jameson.

The home supporters were doing their best to drive their team forward but Cunningham and Buddle were not fazed in the slightest – rising to anything the Darlo attack threw at them.

Cunningham edged Buddle to the man of the match award but it was the former Carlisle United man that produced THE standout moment as he anticipated the close-range shot from Elliott to retreat and heroically clear off the goal line.

Thompson fizzed two effort millimetres away from the inside of the far post but as these games tend to finish – Spartans oversaw the final chance – and very good at that.

Having run his socks off, Maguire was replaced by new signing Andrei Vasile-Ardelean in the final 10 minutes, and the former Team Northumbria striker almost played a part in snatching a late winner.

His injection of pace triggered a huge opportunity for substitute Adam Wrightson – driving onto the edge of the area but lacked the conviction in the shot – screwing it wide.

A PROPER team performance by Spartans.