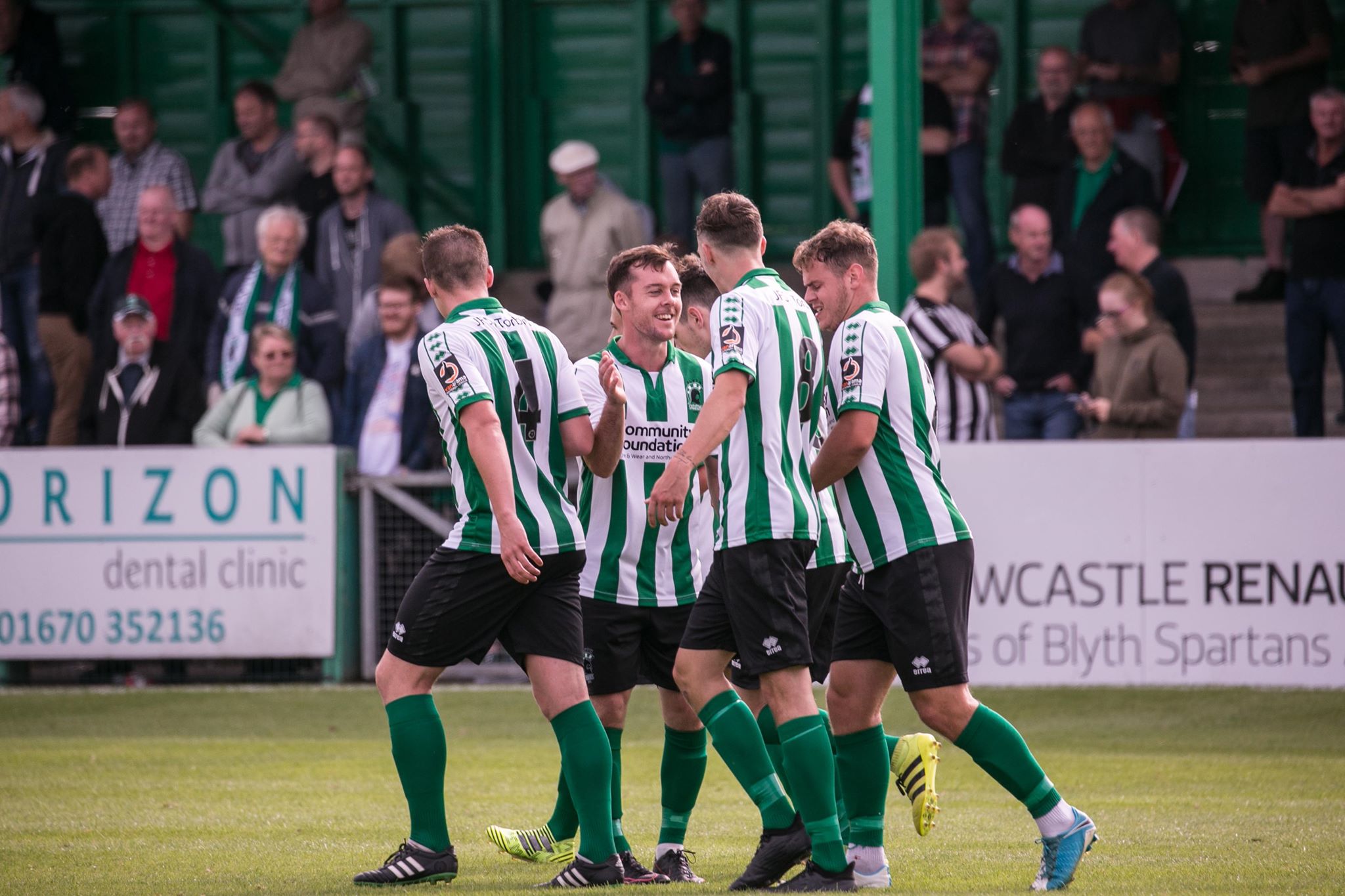 A 9 goal thriller at Croft Park saw Blyth Spartans get their first win of the season thanks to a scintillating display from the men in green and white.

First half goals from Dan Maguire, Kieran Green and a first club goal for Jamie Holmes set the crowd of 737 into raptures at the break.

Sean Reid then added a fourth shortly after the break, before visiting captain Gary Roberts was sent off for a challenge right in front of referee Richard Aspinall. To make matters worse for the visitors, Steven Howson netted an own goal to make it 5-0.

Adam Wrightson added a sixth before the visitors pulled one back through Gary Stopforth. Nathan Buddle added a seventh before Maguire completed the rout in the dying embers of the game.

Spartans opened the scoring in the 14th minute when Maguire netted from the left edge of the six yard box after Dale capitalised on a defensive error, ‘Nipa’ hitting a low effort under goalkeeper Grant Shenton.

In the 18th minute, Green then made it 2-0 when he headed home a cross from Rivers.

Blyth’s fantastic first half display left Chester struggling for chances – with Mooney getting the best chance for the visitors when a ball was floated over the Blyth defence but Mooney hit it first time into the hands of Jameson.

Maguire had a thunderous strike saved by Shenton in the 24th minute but he couldn’t stop Holmes from scoring in the 42nd minute as he dribbled past the Chester defence and smashed it into the far corner.

Chester continued to struggle for chances, Mooney getting another chance at goal when he took a shot outside the box but sent it flying out of the stadium.

Chester had a chance at the start of the second half as Dudley saw one of his shots go narrowly wide.

Blyth’s dominance couldn’t be stopped as Reid headed home a Rivers corner in the 55th minute to make it for 4.

Chester’s day went from bad to worse when the Referee sent off their captain Roberts then a minute later, Rivers put the ball into the box only for Chester’s Howson to put it in his own goal and make it 5 for Blyth.

Rivers had a chance to score as he burst into the box, cut in and curled a shot narrowly wide. He was taken off for Wrightson just seconds after that narrow miss. Wrightson made an instant impact as a burst down the wing into the box and smashed the ball in the near bottom corner. 6-0 to the Spartans.

It really didn’t look like it was Chester’s day when Hughes had a shot at goal headed off the line by Liddle but they got their goal a minute later when Stopworth dribbled into space outside the box and smashed it into the far corner to give the travelling Chester fans something to celebrate.

Blyth weren’t done scoring yet as in the 75th minute, Dale had his shot saved by Shenton only for it to fall to the feet of Buddle to hammer it home to make it 7-1.

In the last few minutes of the game, Dale crossed a ball into the box that nearly went over the head of Shenton but the keeper managed to make a fingertip save to keep it out. Although he couldn’t keep Blyth from scoring for an 8th for long as Wrightson came bombing down the wing then charged into the box and was 1 on 1 with Shenton but squared it across the goal for Maguire to score his brace and end the game with an 8-1 victory for Blyth.

Spartans now face a trip to Blackwell Meadows to take on Darlington.