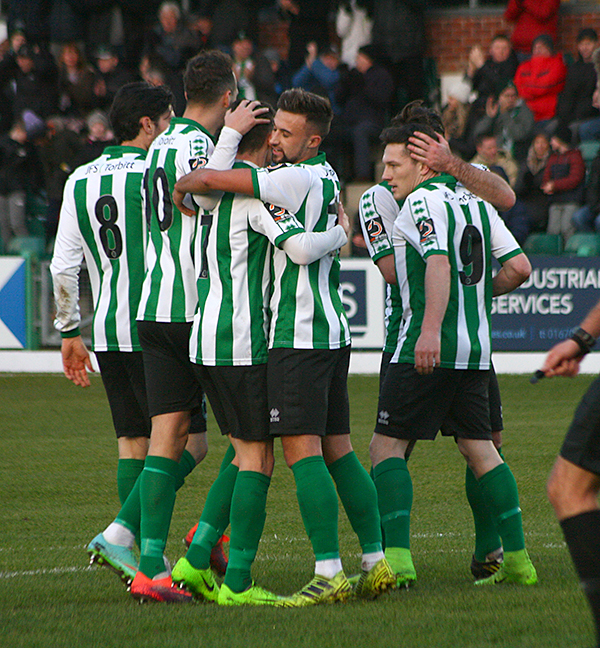 Cunningham’s 60th minute strike from a Michael Liddle corner gave Blyth a lifeline before Jamie Chandler felled Dan Maguire in the penalty area, Reid rifling the spot kick in off the crossbar.

Rob Atkinson and Andrew Johnson had given the hosts a two-goal lead at the break, but Spartans stunning fightback extended Spartans unbeaten run to 11 games in all competitions.

Alun Armstrong faced a dilemma on arriving at Brewery Field with five of his squad suffering through illness – the former Middlesbrough striker forced to play several under the weather players.

Spartans started the game well, almost opening Moors up in the first five minutes, Connor Oliver finding Reid in the penalty area, the midfielder’s cross turned over the bar by James Curtis.

From that point on, the hosts – who dropped a place to fifth after the result – dominated, Robert Ramshaw with the early warning shot as he leathered a 35 yarder over the bar on seven minute – legend says the ball is still travelling now as it sailed over the stand.

Two minutes later Mark Anderson – who scored in the 2-2 draw on Boxing Day – struck a 25-yard half volley towards the bottom right hand corner – Peter Jameson able to claim the stinging effort in front of the post.

The opening goal came on 18 minutes when Spartans failed to clear Anderson’s corner. The second ball dropped to Atkinson 10-yards out who finished calmly to give Moors the lead.

Six minutes later Spartans own lackadaisical play almost afforded the host a second. Jameson’s clearance was pounced on by Anderson who chopped onto his left foot in the area before slotting the ball towards the bottom right hand corner – Jameson’s outstretched foot doing just enough.

Jordan Watson almost scored a calamitous own goal a minute later when he narrowly avoided smashing the ball into his own net from six yards out.

Although Spennymoor controlled proceedings, opportunities were few and far between until just before the break when a throw-in routine provided the second.

In an eerily reminiscent finish of that on Boxing Day, Johnson found space in the penalty area curling the ball past Jameson into the bottom right hand corner.

Two minutes before the break Spartans finally created again. Oliver’s right-wing set piece saw Nathan Buddle rise above Curtis to head home through the legs of Matthew Gould, but not for the last time in the afternoon Mr Williamson bought the tumble of Curtis and awarded a free-kick.

Spartans started the second half brightly without creating any guilt-edged opportunities, and it was the hosts that should have put the game to bed on the hour mark.

Anderson the creator has he picked out the run of Johnson who took aim from 12 yards with just Jameson to beat – unfortunately for the majority of the 1,129 crowd, Johnson struck his effort wide.

That miss became the turning point as Blyth pulled a goal back two minutes later. Liddle’s corner failed to beat the first man, but Jacob Hibbs got the ball caught under his feet allowing Cunningham to stab home at the near post.

Within two minutes, Spartans were level. Maguire was scythed down by Chandler in the area after a series of throw-ins down the left.

Sean Reid stepped up to cannon the spot kick off the underside of the crossbar and into the back of the net – his fifth goal in his last six appearances and 12th of the season.

It could have been even better for Blyth when Buddle hit the target once again, this time from a Rivers corner – unfortunately Shane Henry was stationed on the left-hand post to head the ball away from danger.

A minute later the ball fell kindly for Anderson in the Spartans penalty area, but rather inexplicably the forward opted not to shoot on site and the chance went begging.

The final 20 minutes saw both sides gunning for the victory, but neither side created the match winning opening until five minutes from time.

Alex Kempster – on loan from York City – lofted a ball from the left flank into the penalty area where fellow substitute Adam Boyes connected powerfully, Jameson forced to dive full length to his left to deny the former Bradford (Park Avenue) striker the winner.

An entertaining game, Spartans will be delighted to have earned a point having been in a losing position for the first time since trailing 2-0 against Curzon Ashton, a game Blyth would end up winning 3-2.