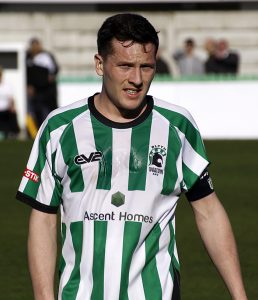 Blyth secured another vital 3 points to move to within 2 points of the Championship as Dan Maguire’s 26th league goal of the season earned Blyth the points at Dales Lane.

Manager Alun Armstrong named an unchanged side from the one that won 1-0 at Stafford Rangers on Saturday.

Blyth started the brighter of the two sides at Dales Lane. Their purposeful start left the hosts on the back foot and the Spartans deservedly took the lead on 7 minutes. Dan Maguire jinked his way into the box before slotting the ball past Jose Veiga in the Rushall goal. The goal was the 100th league goal that Blyth have scored this season.

On 10 minutes, Jazz Luckie had the first meaningful effort on target for the hosts but his effort was tame and lacked the power to trouble Paul Woolston.

Immediately Dan Maguire got the ball down the other end of the pitch before taking aim but his effort was blocked by Veiga. As the game ticked towards the 20th minute, Blyth continued to enjoy the majority of possession. Luke Armstrong and Robbie Dale both saw efforts saved well by Veiga to prevent the Spartans from adding to their lead.

The hosts had to wait until the 35th minute for their next chance but again it failed to test Woolston in the Blyth goal. A corner was whipped into the box and Joe Hull met the ball with his head but his effort drifted wide of the post.

Dan Maguire proved to be a constant threat during the course of half and had another good chance to double his and Blyth’s goal tally but Veiga was equal to it.

Rushall made a change at the break with influential club captain Aaron Forde coming on for Marcus Jackson.

The Pics made a brighter start to the second half and won a free kick in a promising position. It was taken by Mickael Partodikromo but his effort flew over the bar.

The hosts were the brighter side in the opening exchanges in the second half, Danico Johnson went down in the box on the hour mark but the referee waved away his appeals.

On the 70th minute, Luke Armstrong saw a good effort watched well by Veiga who kept his side in the game once again.

Brian Smikle was the next home player to try his luck in the 80th minute when he shot over when well placed. The hosts began to pile on the pressure as they searched for an equaliser. Paul Woolston did well with 5 minutes remaining when he came to the edge of the area to sweep up after Johnson broke through.

There were no further scares in added time as Blyth hung on to move another 3 points closer to securing promotion.

It may not have been the best performance of the season but similarly to the game on Saturday, the Spartans showed resolve and character to bring the points back to Northumberland.

Promotion can be sealed on Saturday, when Halesowen are the visitors to Croft Park.