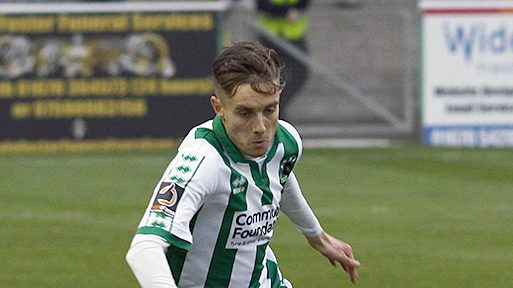 Rivers opened the scoring in the 26th minute before doubling his tally a minute into the second period.

Dior Angus pulled a goal back with six minutes remaining, but it was the visitors who took the spoils, making it 10 points from a possible 12 away from Croft Park in recent weeks.

Spartans made four changes from the side that beat Marske United 4-1 in the FA Trophy last weekend. Alex Nicholson returned to the side, as did Connor Oliver, Jarrett Rivers and Aaron Cunningham.

However, it was Nuneaton who took the game to Spartans early, Peter Jameson forced to deny Carl Baker within 30 seconds of the kick-off – with relative ease.

On six minutes, Jameson was called to action again when Ryan Edmunds escaped the offside trap and was left one-on-one with the Spartans ‘keeper, Jameson able to deny the former Alvechurch man before Adam McGurk squandered the rebound.

On 22 minutes Maguire almost opened the scoring. The striker found himself one-on-one with Belford but couldn’t find a finish.

Four minutes later the in-form Rivers did give Spartans the lead. Kieran Green was the provider as he found Jarrett in the area – Rivers finishing coolly send the Cannock Spartans wild – and those who’d travelled from further afield – wild.

It was another 10 minutes until another chance was created for either side, Connor Oliver the recipient as he fired an effort over the bar from the edge of the area.

Nuneaton grew in confidence as the game approached the break, and Jameson once again in the action. Edmunds for a second time found himself one-on-one with the former Darlington man and once again the stopper game out on top.

A minute before the break, Jameson made his fourth stunning save off the half, this time tipping Dior Angus’s goal bound effort onto the upright.

The Nuneaton onslaught at the end of the first half was bettered by Spartans’ dominance in the opening salvos of the second.

Within a minute of the re-start Blyth doubled their lead, Rivers sniping in to the six-yard box to convert a low cross that evaded three Borough defenders.

And five minutes later the visitors netted their third, Maguire the scorer as he finished with confidence for a second time inside the penalty area.

Just after the hour mark the hosts rattled the woodwork for a second time. This time Jameson was beaten as Nat Kelly cannoned a header of the crossbar from a left-wing corner.

Six minutes from time the hosts did net a consolation through top goal scorer Angus. The striker passed into the empty net after the ball ricocheted into his path as Jameson kicked the ball against substitute Leek.

The result moves Spartans up to 10th in the Vanarama National League North with a game against Ashton United coming up at Croft Park on Saturday.