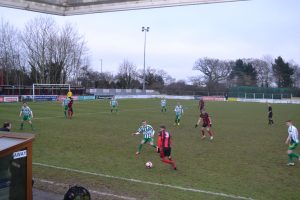 The Spartans produced a scintillating performance to come away from Don Amott Arena with a resounding 7-1 victory over Mickleover Sports as Spartans remained unbeaten in 2017.

There was one change from the side that had won against Skelmersdale as Matty Pattison was replaced by Damen Mullen.

The hosts were quicker out of the traps in Derbyshire as Zeph Thomas tussled with Nathan Buddle in the opening minutes before going down theatrically in the hopes of winning a penalty. The referee was rightly not impressed and waved away the optimistic appeals from the Mickleover players.

On 14 minutes, Thomas again was involved as a free kick from halfway was nodded down by Clinton Morrison and Thomas struck a deflected effort wide of the post. It was from the ensuing corner that Blyth had their first chance of the game as Dan Maguire bundled his way through a melee of players on the edge of the penalty box but dragged an effort wide of the far post.

Jake Scott was the name in Mr. Smith’s notebook as he hauled back Robbie Dale on the halfway line. The free kick was played forward but cleared well by the men in red and black to Andy Dales who then showed great pace and composure to get down the left flank. Dales eventually managed to get a shot away which was deflected wide by Mullen for a corner. The set piece was worked to Pablo Mills who steadied himself before curling an effort wide from 18yds.

A frenetic few minutes continued as Paul Woolston’s goal kick found Robbie Dale on the left hand side of the field. Dale then lifted the ball over the heads of a static defence and Maguire gleefully ran onto the ball before lifting the ball delicately over Jamie Green with his first touch before rolling the ball into an empty to put Spartans ahead.

The next attempt drew the home side level on 26minutes albeit somewhat controversially from a Blyth point of view. Sean Reid was harshly penalised for a foul on Jack Broadhead in the centre circle before the free kick was knocked forward and Albert Landsown was in the right place at the far post to nod in.

Mickleover had a great chance to take the lead on 35minutes when a clearance from Woolston found Thomas who spotting Woolston off his line could only lob wide when well placed.

The miss was to prove costly as Spartans regained the lead with their next attempt. Ryan Hutchinson sprayed the ball from defence to the left flank for Robbie Dale who brought the ball under control and played in a sumptuous cross that an arriving Sean Reid was free to head home unmarked from 8yds.

Both sides had chances to add to their goal tallies before the interval. First, Jarrett Rivers turned Elliott Ptak inside and out before whipping in a dangerous cross that Luke Armstrong met with a diving head but Green was alert at the near post to block the effort.

Dales had been the standout player in the first half for the hosts and he could have levelled as he played and intricate 1-2 with Morrison before he placed an effort inches wide of the post.

The second half began like the first half with Mickleover in the ascendancy. Thomas was found by Dales on the edge of the box but he wasted the opportunity by blazing his effort high over the bar.

Blyth gradually took more control of the game on a pitch that was beginning to cut up and disrupt the fluent passing game that has become a trademark of Spartans in recent seasons. On 49minutes, Stephen Turnbull whipped in a glorious corner and Maguire flicked his header just over the bar.

A minute later and another set piece from Turnbull was met by the head of Reid but his header cleared the bar with Green beaten.

Robbie Dale was in fine form for the Spartans and was increasingly targeted by the home players as he left them bamboozled with his fancy footwork. Lansdown was cautioned for a late challenge on Dale on the touchline.

It was his opposite winger for Spartans who added a third when he collected a loose ball on the edge of the box and drove across the box before a left footed strike back across goal which bobbled over the keeper.

On the hour mark, Dale was substituted to generous applause from the whole ground as he departed for Adam Wrightson. The young winger made an instant impact on the game as his cross was flicked on by Mills and Sean Reid was on hand to convert from close range as Blyth extended their lead.

Another substitute made an immediate impact as Jordan Laidler replaced Maguire. Reid was afforded the freedom of Mickleover to advance from halfway and unleashed an effort from 25yds which the hapless Green could only palm out and Laidler was on hand to convert and open his Spartans account.

There was cause for concern for Blyth when Luke Armstrong collided with Green who left his mark on the young Spartans striker. A ball was played over the top and despite getting to the ball first Green raised his boot and caught Armstrong in the midriff. There was a sense of shock from the Spartans bench and players that the referee did not even consider it to be a foul.

Green was picking the ball out of the net again on 89 minutes when Sean Reid was once more allowed to advance with the ball. He let fly from 30yds and this time his effort flew over the head of the stationary Green and despite looking like it would clear the crossbar it swerved vehemently and into the corner of the net to complete his hat trick.

The scoring was not complete and in the final minute of the 3 added, Laidler carried the ball through a non-existent Micklevoer midfield who had long since been missing and placed a 25yd drive into the top corner out of the reach of the despairing dive of Green.

It was a magnificent performance from a side that rightly sit at the top of the Evo-Stik Northern Premier Division. Other results saw the lead at the top of table extend as Buxton and Rushall suffered defeats.

Attention now turns to Matlock Town who are the visitors to Croft Park on Satuday.