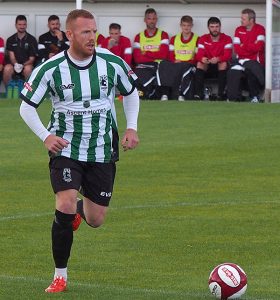 Blyth Spartans put on a five-star display at The Grove – as Matty Pattison and Daniel Maguire inspired a resounding win over ten-men Halesowen Town.

Pattison opened his Spartans account with a fantastic 25-yard free-kick, before Daniel Bragoli was dismissed for a second yellow card at the end of the first half.

Maguire’s two goals came either side of Pattison’s second and a header from defender Ryan Hutchinson in a fascinating ten minutes spell after the hour – as Blyth dominated their hosts for most of the second half.

Spartans started proceedings under light showers, forcing the droves of Blyth fans to huddle under the roof of The Shed stand at the The Grove. Some brave souls opted to switch ends when the two sides did following the coin toss and were rewarded instantly with glorious sunshine, in a moment that summed up the changing conditions throughout the afternoon.

Both sides started in a scrappy fashion, which was proved when the first real action of the match resulted in the game’s first booking. Daniel Bragoli slid in hard on Sean Reid on halfway, with referee Sam Mullhall opting to show a yellow card after just six minutes.

The first chance for either side fell to the Yelts four minutes later – as Aaron Griffiths intercepts a loose Spartans pass and ran at Andrew Cartwright. Halesowen’s left-back cut inside and pulled the trigger at the edge of the box, but Peter Jeffries was able to claim it comfortably.

Blyth looked to create an opening for themselves after 13 minutes. Matty Pattison tried to pick out Robert Dale in the box from the right, but his cross went just over the talismanic winger’s head.

Halesowen then thought they had broken the deadlock from a corner. Malcolm Melvin played the ball to the back post and picked out Richard Sho-Silva, but he could only power a header wide.

The visitors had taken a while to get going, but soon had a number of chances to score through Sean Reid. Reid saw his first shot charged down after being played in from some great work by Michael Liddle, before he was denied a near post header from Pattison’s cross by some last-ditch defending.

Blyth could sense that a breakthrough was coming and, when it came in the 24th minute, it was more than worth the wait.

Pattison stepped up to take a free-kick from about 25 yards out and curled an effort into the top corner, giving Daniel Platt no chance – as the former Newcastle United and South Africa midfielder opened his Spartans account in spectacular fashion.

Blyth looked to continue their dominance after going a goal up, but a lapse in concentration in midfield just after the half-hour mark almost cost Spartans their lead.

Lee Chilton picked the ball after a poor touch from Matthew Wade and sent in a searching ball to the back post, looking for Melvin. The right winger was free to nod in with the goal at his mercy, but Jeffries did brilliantly to get across his goal and pull off a fantastic save to deny the hosts an equaliser.

Town’s woes would be compounded with one minute to go in the first half, when they were reduced to ten men. Bragoli appeared to catch Stephen Turnbull late in the air with an elbow, leading to the midfielder receiving his marching orders for a second yellow card.

Spartans looked to make their man advantage count straight from the restart, as Pattison drilled in a low cross to the near post. However, Platt was more than alert to the danger and was able to get down to gather it.

As the second half started to drop into a lull, the very vocal travelling band of Spartans supporters were soon shouting for a penalty, when Maguire was knocked to the ground by Asa Charlton while chasing down Kyle Morrison’s loose backpass. However, Mullhall was quick to dismiss the claims.

Pattison then went close to scoring a second, when he blasted the ball towards goal from the right two minutes later. However, Platt was more than equal to it though, as he palmed the shot to safety.

The Halesowen keeper made an error just after the hour mark, however, which resulted in a second goal for Blyth.

Dale danced around Morrison, before drilling a shot straight at Platt. However, he spilled the ball and “Nipa” lived up to his nickname – as he nipped in to stab home his first goal of the season.

Spartans were then celebrating again just four minutes later. Turnbull crossed back in after seeing his corner come back to him and Hutchinson lept up to glance in a lovely looping header.

The visitors continued to turn the knife on their opponents with a third goal in just seven minutes.

Andrew Cartwright cut the ball back in the box after a driving run from the right, which should have been cleared by the Halesowen defence. Their hesitation allowed Pattison to take advantage and blast home his second of the afternoon from close range.

Maguire then thought he’d scored a brace of his own, when substitute Michael Richardson played him in with a lovely touch past the defender. Maguire fizzed a shot past Platt, but he could only watch as it clattered off the post and then Michael Liddle fired the rebound wide.

The prolific striker was not to be denied though and it would be Richardson who would provide for him again with 16 minutes to go. The former Newcastle United midfielder played the ball into feet – allowing Maguire to run at the defence and then drill a low shot into the corner, past Platt’s outstretched fingertips.

With time running out, Pattison played a great ball through to Maguire – as the striker went looking for his hat-trick. A jinking run had the defenders on the back foot, but they were able to get a block in to deny Maguire a third.

Spartans manager Tom Wade will be delighted with his side’s dominating display and will hope they can keep up this level of performance when they welcome Ashton United to Croft Park on Tuesday evening.