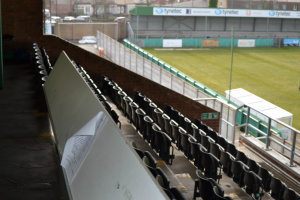 Blyth bounced back to winning ways after a comfortable victory over Curzon Ashton, thanks to goals from Dan Maguire, Sean Reid and an own goal. However, the victory was overshadowed by a serious looking injury to Jordan Watson.

Adam Wrightson come in for Jarrett Rivers and Lewis Horner making way for Sean Reid as manager Alun Armstrong rotated his squad slightly with the game on Monday against Harrogate Town in his mind.

Curzon Ashton looked to stamp their authority on the game early on and made some robust challenges to try and rattle the Spartans. One of these challenges left David McTiernan down on the side of the pitch after colliding with the boards.

The hosts had the first opportunity on 9 minutes as Jordan Watson slipped under slight pressure from Ben Wharton who advanced into a one on one with Peter Jameson but the custodian made a fine stop with an outstretched leg.

The slip from Watson was to be his last action of the game and he left the field on a stretcher clutching his knee. The Curzon Ashton player was at no fault as he pressured Watson and just an unfortunate incident. The change saw Lewis Horner come on and slot in at right back allowing Ryan Hutchinson to move inside to another of his natural positions at centre half.

The setback seemed to affect the Blyth players as Curzon looked to seize the initiative. A series of half chances on 16 minutes eventually saw the ball for Leonard but his goalbound effort was blocked superbly by Nathan Buddle.

It took Blyth until midway through the first half to fashion their first real chance. Adam Wrightson was able to burst clear down the flank and his deep cross caused havoc before the ball was finally claimed by Mason in the goal for Curzon.

Blyth were on the back foot again on 31 minutes. Leonard was able to collect the ball deep in Spartans territory and advanced before unleashing a strike on goal from 25 yards. The ball whistled just wide of the near post as Jameson scrambled across.

Blyth were forced into a second change just before the interval as Adam Wrightson was replaced after pulling up following a sprint down the line.

The Nash continued to press before the interval with first a clever corner routine needing to be punched after by Jameson. Leonard then had the ball in the net but it was ruled out for offside much to the consternation of the home support. The assistant referee was spot on though as Leonard had strayed too far forward before the deflection off a Blyth player.

Blyth came out looking much sharper in the second half. Blyth almost took the lead immediately as a ball into the box from Liddle was met by the head of Sean Reid but it was palmed away by Mason.

Spartans continued to ratchet up the pressure and just before the hour mark could have been ahead. Dale Hopson did fantastically well on the edge of the box before his cut back fell to Jarrett Rivers who saw the effort blocked.

Robbie Dale was next to try his luck with a free-kick from 30 yards. The ball was struck sweetly by the captain and it produced a reflex save from Mason. During the ensuing scramble, there were loud claims by both Spartans players and fans alike.

On 66 minutes, Michael Liddle was found in the box by Robbie Dale who was starting to dictate proceedings down the left flank. The full back was found in his space but on his weaker foot was only able to fire over.

The visitors eventually took the lead on 68 minutes and it was from an unlikely source. David McTiernan travelled with the ball before slipping it out wide to Rivers, the cross was fired across the box and was glanced past his own ‘keeper by Matt Regan.

Dan Maguire, who had been quiet up until this point wriggled clear in the box and fired in an effort at the near post that Mason again was able to get something behind and stop Blyth from doubling their advantage.

The hosts looked shell-shocked after being under pressure for long periods of the half but had another fantastic opportunity on 74 minutes. A free kick was awarded to the home side and despite it being taken quickly and in advance of the original position allowed Crothers a one on one with Jameson. This time the ‘keeper was not needed as the effort passed wide of the far post.

That miss was to prove costly as Spartans doubled their lead. Dale broke down the left and his ball into the box found Horner well in advance of his right back slot but his effort was blocked. However, it fell kindly into the path of Maguire who dispatched the ball into the net and sent the large travelling contingent into raptures behind the goal.

That effort should have been enough to see off the spirited home side but Spartans were still not done. Dale advanced with the ball from halfway despite the close attentions of Bianga. The substitute was eventually forced to being down Dale as he entered the area and the referee was forced to point to the spot. Dale Hopson had just been replaced so Sean Reid stepped forward and despite Mason guessing the right way was unable to stop the ball nestling in his bottom left corner.

Blyth saw out the remaining few minutes of the game to record an impressive victory and perhaps more importantly kept their first clean sheet of the season.

Attention now turns to the visit of Harrogate Town on Bank Holiday Monday. The visitors are currently leading the Vanarama National League North table so it promises to be an enthralling game.