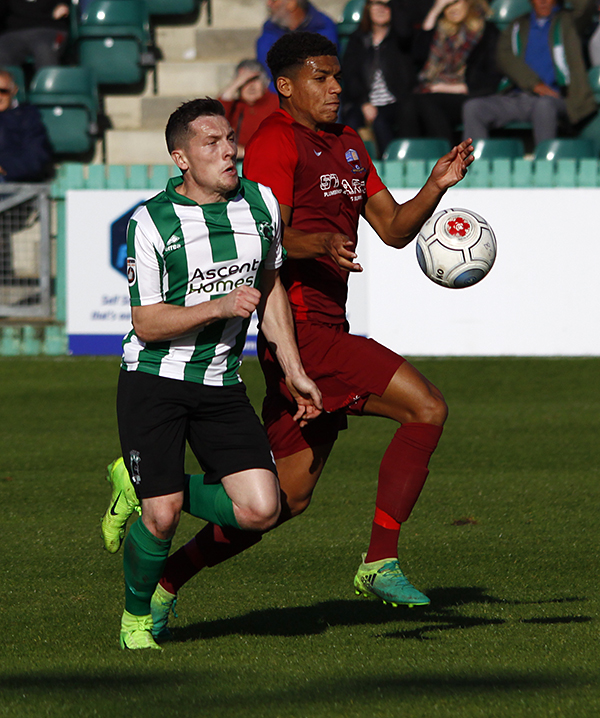 It was a second half to forget for Blyth Spartans as Brackley Town took the spoils at a windswept St James’ Park on Saturday afternoon.

Spartans did take the lead through Dan Maguire after 18 minutes, but a six minute spell just after the break turned the tide.

Spartans did their best against the wind to pull back level, before a contentious penalty was awarded four minutes from time, converted by Williams.

Storm Bryan was in full effect from the kick-off – Spartans having the substantial wind in the first period – but it was the hosts who were gifted the first opportunity, Andy Brown denied one-on-one by Jameson in the first 60 seconds.

Brown went close again on four minutes, getting on the end of a cross from the right – Jameson on hand again to deny the centre forward.

Spartans measured approach began to cause problems on ten minutes, Robert Dale with a great reverse through ball into the path of Wrightson who was only denied by a last ditch challenge.

Just after the quarter of an hour mark, Spartans took the lead through the prolific Maguire. Wrightson was the provider with a perfectly weighted pass into the penalty area – ‘Nipa’ dispatching first time across goal from the right – in off the left hand upright – his 13th goal of the campaign.

The hosts replied strongly in the next five minutes, first Glenn Walker forcing a save from Jameson before Williams fired over from 12 yards out.

Spartans almost doubled their lead on 26 minutes through an unlikely source. Brackley afforded Ian Watson too much space on the left flank – he set himself before unleashing a rasping 25-yard bullet just over the right hand corner of Lewis’ goal.

The visitors were dealt a blow when Maguire was forced off after half an hour due to injury, with Jarrett Rivers his replacement.

On 37 minutes Brown was about to equalise for Brackley Town, denied by a stunning last ditch sliding challenge by Nathan Buddle.

Four minutes later Wrightson was in the action again for Spartans, latching on to a Dale through ball, hitting the effort  just wide from the left edge of the penalty area.

Andrew Cartwright went close in injury time at the end of the first half – hitting a 20-yard effort into the right hand side netting.

The 1-0 half time lead evaporated in a disastrous start to the second half. Just 60 seconds into the second period, Reid’s sideways pass was intercepted by Williams who scampered into the penalty area before finding the top left hand corner with a powerful strike.

The ball was headed back into the Blyth penalty area where Brown ran in unmarked, pulling the ball back to Shane Byrne to stab the ball home.

The whirlwind start to the second half was a wake up call for the visitors, as Brackley adapted to the conditions far better than Blyth did in the first period.

As time progressed, Spartans short passing game began to beat the high press of the hosts, the first chance of the half falling to Wrightson who nodded over a Dale cross.

On 73 minutes, Buddle stepped out of defence and found the run of Watson down the left with a sumptuous diagonal ball. Watson crossed for Reid to try and turn the ball home, but he couldn’t hit the target.

With four minutes remaining, the referee awarded the hosts a penalty that baffled both home and away fans.

Jameson made a fantastic diving stop at the feet of Williams, before an onrushing Brackley attacker ran into the Spartans’ ‘keeper who lay prone on the ground, the ref pointing to the penalty spot.

Williams stepped up before sending Jameson the wrong way, leaving the result no longer in doubt.

All in all, Brackley adapted to the conditions better than the visitors, pressing Spartans high early in the second half. Blyth now host Darlington FC on Saturday – looking to get back to winning ways.