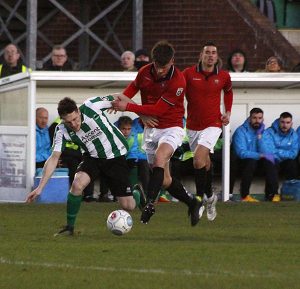 Blyth Spartans slipped to a late 2-1 defeat at Boston United.

The Pilgrims got their noses in front in the 62nd minute when Ashley Hemmings sent Peter Jameson the wrong way from the penalty spot.

Alun Armstrong’s men had a penalty shout of their own in the first-half – which referee Martin Woods initially awarded before the linesman overruled the decision.

Fourteen minutes after falling behind, Spartans did level through Dan Maguire’s 14th goal of the season when he tapped home from close-range after a cross from Ian Watson.

However, Blyth let their point slip with substitute Kabongo Tshimanga capitalising on the loose ball following a deflection via the legs of Nathan Buddle due to a series of ricochets, seven minutes from full-time.

Maguire made his first National League North start since the 1-0 home defeat to Salford City on December 2.

But the return of Maguire failed to offer any immediate inspiration for the visitors, who spent the majority of the opening exchanges allowing the Pilgrims to carry possession.

The division’s in-form would have been disappointed not to have tested Spartans keeper Jameson, in particular, Reece Thompson as he emerged as the Pilgrims early dangerman.

Spartans first real bit of danger to deal with came in the 11th minute when Damen Mullen and David Atkinson bravely blocked efforts from Thompson.

On the half-hour mark, Blyth almost had taken the lead with Dale Hopson witnessing his goal-bound shot superbly blocked before his second attempt was blazed into the stand.

The first-half went down as a low key affair, though it did present its fair bit of controversy in the 39th minute.

Sean Reid fell to ground under the challenge from Pilgrims keeper Jon Stewart – which led to referee Woods pointing to the spot.

However, after going over to consult his linesman, the decision was overturned and Blyth had to settle for a corner.

Boston offered late flurry at the end of the half with Jameson called into action with a solid low save from Thompson.

At the beginning of the second period, both teams fashioned their dangerous moments with each defence producing vital blocks to stop their respective goalkeepers from being called into stern action.

It was the pace of Rollins, Hemmings and Thompson that were causing Blyth problems – gaining their rewards when Thompson earned a 61st-minute penalty for Boston.

Nathan Buddle fell victim to bringing down the striker and Hemmings was left to dispatch his spot kick straight down the middle.

But the visitors weren’t to be denied for any longer with Maguire on-hand to level the scores in the 76th minute.

Watson aimed his cross onto the head of Maguire – the initial effort was directly at Stewart but Maguire stayed alert to tap home the rebound.

The early signs after the equaliser were positive for Spartans in the search for a possible winner, but substitute Tshimanga ended any hopes of that.

A shot was cannoned at goal – inadvertently hit Buddle before Tshimanga swept up the loose ball.

Unfortunately for the travelling supporters, Spartans’ closest attempt to snatching a late point presented itself from Watson’s long-distance effort which cleared the crossbar.