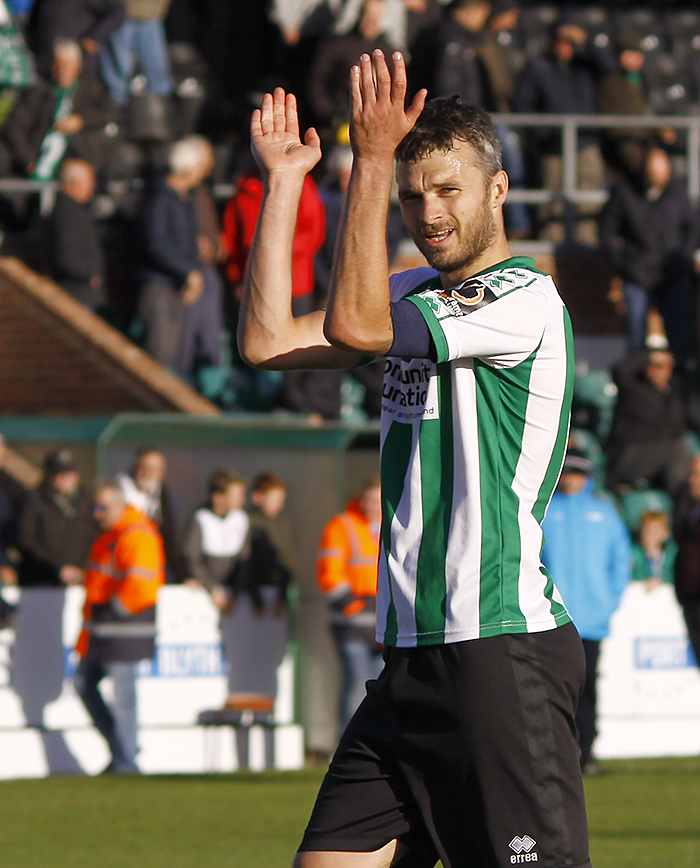 Maguire struck twice in the first half to give Spartans a two-goal lead over their lower league opponents. Chay Liddle then appeared to give the Seasiders hope when he halved the deficit on 42 minutes.

However, Captain Fantastic himself then stepped up in first half stoppage time to score his 198th goal for the club from 12-yards – leaving only the legendary Brian Slane ahead of him in the Blyth Spartans goalscoring charts – before Maguire tapped in at the death to see Spartans progress into the next round of the Buildbase FA Trophy.

Looking to record a third win at Croft Park within the week, Alun Armstrong made a number of changes for the visit of Evo-Stik League First Division East high-flyers Marske United. The most notable of those saw the reintroduction of Nathan Buddle, who made a welcome return to the side – after missing the last few games through a concussion.

Kieran Green registered the game’s first chance with just three minutes on the clock with an early sighter from outside the area. However, it was high, wide and not at all handsome.

A speculative right-footed strike from Michael Liddle – who had been a doubt with illness before the game – followed two minutes later, but he dragged the ball well wide.

Marske had been rather muted in the early stages, but the Seasiders went close on eight minutes with their first corner of the afternoon. Peter Jameson’s punch clear went only as far as Craig Gott, whose 18-yard shot took a heavy deflection before flying into the arms of the grateful Spartans stopper.

Still searching for that elusive 198th goal after five games, Robert Dale danced his way into the box soon after and left Liam O’Sullivan and Gott chasing shadows. Blyth’s captain shot across the face of goal seemed destined for goal, before the foot of Matthew Waters blocked its path and allowed the visitors to clear the danger.

Just after the 15-minute mark, the Seasiders threatened again. James Fairley’s whipped cross picked out the head of Jamie Owens, but the forward glanced his header wide across goal.

Moments later, Maguire brought the ball down in United’s box well. He got his shot away well, but it was blocked at his feet by the body of Adam Wheatley.

“Nipa” was not to be denied though – as Spartans capitalised on a rogue Marske pass and took a deserved lead on 21 minutes.

Green did well to intercept and sprayed a ball across Dale, who would have been well within his rights to have a crack himself inside the area. Instead, he set up Maguire to finish calmly from close range – after the striker showed great composure to fool Robert Dean into the dive, before dispatching the ball home.

That familiar Dale-Maguire link-up saw Blyth nearly doubled up inside four minutes, when the winger’s cross deceived everyone bar a persistent Maguire at the far post. With no choice but to shoot from a tight angle, he couldn’t keep it on target.

Marske had a great chance to level the contest just before the half-hour, when Joshua Rowbotham met a corner at the back post. Luckily for the hosts, Damen Mullen was on the post to clear the header off the line – as Marske’s appeals for handball were ignored by referee Andrew Kitchen.

The Seasiders’ frustrations were further compounded just two minutes later, when Maguire managed to just about squeeze home his second of the afternoon.

Green played a one-two with Mullen from a corner, before beating his man and whipping in a cross that met the head of Maguire six yards out. Dean did well to touch the header onto the post, but it wasn’t enough to stop the ball falling over the line off the upright.

With three minutes of the first half remaining, the visitors caught the Spartans napping – as Fairley picked out Chay Liddle in miles of space in the area. Liddle found the back of the net, despite Peter Jameson’s best efforts, to seemingly give Marske a boost before the break.

As the game entered first half stoppage time, Bradley Fewster’s shot was blocked by a diving Rowbotham, before the defender brought him down in the box from the rebound to set up a bit of Spartans history that restored their two-goal lead at the interval.

After being stuck on 197 goals since his winner at Southport, Dale stepped up to take the penalty that would finally see him surpass Steve Pyle’s haul of 197 goals – as he sent Dean the wrong way with ease.

Green looked to put further daylight between the sides six minutes after the restart, but his curling effort from 20 yards went narrowly wide of the far post.

Seconds later, down the other end, Jameson produced a fantastic save to tip Fairley’s powerful rocket onto the bar.

Having made a return to action for this Buildbase FA Trophy Third Qualifying Round tie – following a concussion during the 1-1 draw at Brackley three weeks ago – a desperately unlucky Buddle had to be substituted with what looked like another head injury on the hour. Connor Oliver’s introduction saw the versatile Sean Reid fill the void in defence.

Adam Wrightson came off the bench on 72 minutes and ran through the visitors like a hot knife through butter within a minute of his introduction. With Lewis Horner in support, he opted to go himself but was muscled off the ball before he could get a shot away.

Owens met Curtis Round’s corner at the near post with 15 minutes to go, but his header went just over the bar.

United went closer still to a second goal four minutes later, when Fairley rifled a shot towards goal from close range. An instinctive stop from Jameson saw him parry the ball away though.

Man of the match Michael Liddle followed up a crunching tackle in the 82nd minute with an audacious lob attempt seconds later, but it was never troubling Dean in fairness.

With the visitors having nothing to lose, they drove forward once again and were inches away from making it 3-2 late on. Chay Liddle’s volley snuck just past the post.

There was still time for Rowbotham’s head to connect with Gott’s free kick from the left, but he was unable to really test Jameson as it went over the bar.

Just as it had been at the end of the first half, Marske’s sustained pressure was rewarded with Spartans further extending their lead as the game entered stoppage time.

Dale shot from the left, but it clattered off the near post with Dean beaten. A fortunate Maguire was there to tap in the rebound though, to secure both the match ball and Blyth’s place in the Buildbase FA Trophy First Round.

Blyth will look to extend their three-game winning run, when they return to Vanarama National League North action at Nuneaton next Saturday (3pm kick off.)