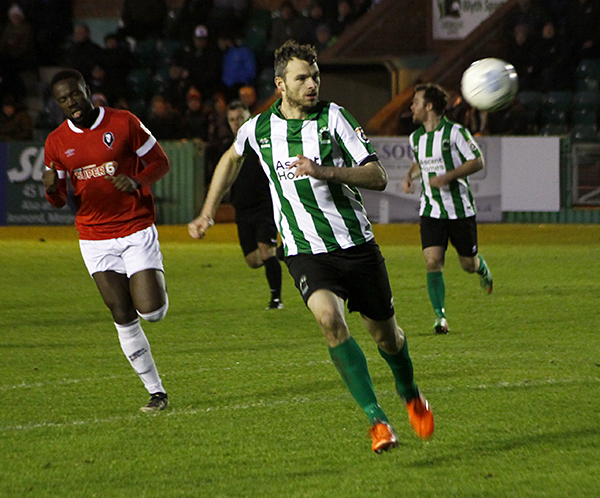 Blyth Spartans advanced into the semi-finals of the TechFlow Northumberland Senior Cup with a comprehensive 4-0 victory over Bedlington Terriers.
A goal in either half from Greg Rutheford, alongside a lively performance from Dylan McGlade helped Spartans on their way.
Jordan Laidler and Robbie Dale, who unusually captained his side from centre-half, also added to the score sheet.
Alun Armstrong rotated his Spartans’ starting 11 against the Northern League Division Two outfit as Robbie Dale surprisingly featured at centre-back.
Blyth expectedly started brightly with McGlade amongst the early goalmouth action.
Just two minutes in, McGlade tested Jak Wells’ reflexes with a low strike from 10 yards out.
McGlade then beat the offside trap moments later by latching onto a ball from David McTiernan, though agonisingly fired wide of the bottom corner.
But when Jack Foalle headed wide from Scott Lowery’s corner in the 14th minute – Bedlington began to cause some problems for their hosts.
Calvin McMahon used the space ahead to advance down the left-hand side. He pulled the ball back to Zak Atkinson as only a last-ditch block from Dan Burns denied the Terriers a certain and shock lead.
Spartans looked flat and were in need of some inspiration, and that arrived when Laidler found the opener in fortuitous fashion as his cross caught Wells off guard on the  half hour-mark
Six minutes later, the hosts established their lead as clever work from McGlade at the by-line allowed him to sniff out Rutherford, who made no mistake with his header.
The Terriers refused to lie down, though, and should have perhaps pulled one back before the break – Lowery curling his strike past the post from close-range.
Spartans themselves had a golden opportunity to extend their advantage with Rutherford picking up Wells’ loose ball, but the composure was just lacking as the keeper recovered well.
Dan Maguire had put the ball in the net on the follow-up but the linesman flagged for offside.
That proved to be the striker’s last action of the game as he was replaced by Lewis Horner at the interval.
It took until the hour-mark until the first piece of second-half excitement was granted.
Substitute Luke Wilson, seconds after coming on, almost made an instant introduction for the Terriers but he could only direct his header wide from eight yards.
Blyth stepped up a gear in the final 20 minutes to ensure their visitors would have no chance of a comeback.
The home side’s first sniff on goal was awarded when McGlade’s shot was fumbled into the path of McTiernan, who scored. However, the linesman’s offside flag came to Wells’ rescue in the 70th minute.
A few minutes after, Horner should have marked his return from injury with a goal but directed his sliding effort over.
But Spartans captain Dale led by example to ensure his side’s win – curling his free-kick over the wall as Wells stood rooted to the spot
The home side found time for a fourth as McGlade showcased his trickery on the left wing to feed the emerging run of Rutherford, who powerfully headed home.
Shaun MacDonald was called into his rare action in the latter stages to preserve his clean as Blyth eased into the last four.
Blyth Spartans: MacDonald, Cartwright (Lazzari 80), I Watson, Green, Burns, McGlade, Laidler (A Murray 56), McTiernan, Maguire (Horner 46), Rutherford, Dale.
Unused Subs: Hooks, Wotherspoon
Bedlington Terriers: Wells, Henderson, Dobson, Herron (Scarth 71), Gibson, Miller, Lowery, Smith (Smith 61), Atkinson (Gibbons 56), Foalle, Lee-McMahon
Unused Subs: Stewart, Coyle
Attendance: 298
Referee: Paul Brown