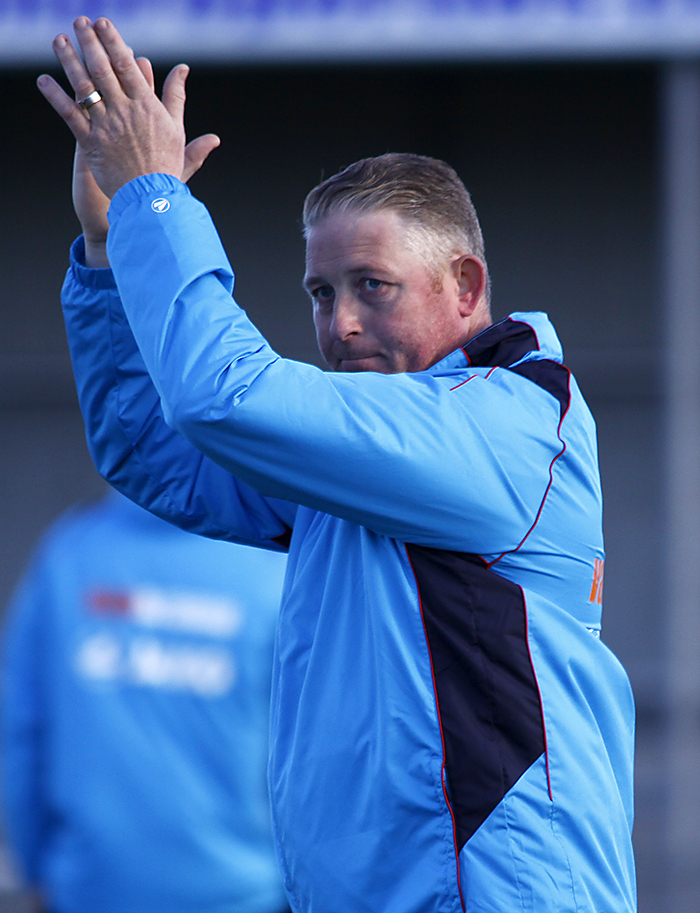 A horrendous error from Curzon Ashton goalkeeper Cameron Mason gifted Blyth all three points on Saturday afternoon – as Spartans battled back from two goals down to record a 3-2 win in the Vanarama National League North.

Ashton had taken an early lead through Ryan Brooke, before a contentious penalty award saw Oliver Crankshaw double up just after the half-hour. A revigorated Blyth pulled one back through Bradley Fewster’s first league goal for the club on 58 minutes, before Daniel Maguire smashed home an equaliser 11 minutes later.

With 15 minutes to go, Jarrett Rivers found the back of the net from 30 yards – after Mason messed up a routine stop and let the ball roll under his body and through his legs, to seal a fantastic second half fightback for Blyth.

Spartans made three changes to the side that started last Saturday’s 1-1 draw with Brackley Town – as Alun Armstrong appeared to set his side up in a 4-4-2 formation for the visit of Ashton, with Fewster lining up alongside Maguire. Nathan Buddle’s concussion in that game saw Jordan Watson line up alongside Louis Laing, while Lewis Horner moved from central midfield to fill the void at right-back.

The home side fashioned the game’s first chance with just three minutes gone, when a short corner was played to Rivers on the left. The tricky winger produced his trademark step-overs before crossing in, but defender Mohamud Ali floated like a butterfly to take the sting out of the cross with a header away.

A Kieran Green free kick 60 seconds saw the hosts go agonisingly close to breaking the deadlock, when he picked out Sean Reid at the back post. The lofty midfielder’s header seemed destined to hit the back of the net, but Mason was able to tip it behind with an instinctive stop.

Connor Hughes capitalised on Horner’s slip on halfway to race down the left with five minutes gone. With the winger looking to cause problems with a cross in towards Brooke, left-back Michael Liddle was able to come across to intercept the attempted pass.

After quarter of hour, Curzon went close from a corner played short. Hughes rasped a strike across the face of goal from the corner of the Blyth box, but the ball flew just over the bar.

Soon after, Robert Dale got down the right and drilled a cross into the near post. Fewster rose to meet it, but it was asking a lot of the forward and he was unable to keep his header on target.

Dale went for goal himself from distance on 22 minutes, when he unleashed a 25-yard rocket that swerved through the air and appeared to deceive Mason. The goalkeeper managed to get his body behind the ball and claimed it at the second attempt, before an instinctive Maguire could pounce on the rebound.

Spartans’ encouraging display was soon quelled though, when they gifted the visitors the lead with some poor defending on 25 minutes.

Crankshaw’s burst of pace left Blyth’s backline for dead, before he played a peach of a cross in to pick out strike partner Brooke at the far post. With the simple task of a free header from four yards, the Ashton striker made no mistake and nodded past Jameson.

An almost identical break a minute later saw Crankshaw’s running get him in again. Opting to shoot himself from a tight angle this time, he was thwarted by the foot of the Spartans goalkeeper.

When the ball seemingly ran out of play for a goal kick just after the half-hour mark, referee Paul Brown incensed the Croft Park faithful by pointing to the penalty spot – after Jameson had needlessly shoulder-barged Hughes off the ball inside the box. Crankshaw stepped up and smashed the spot kick home, sending the Spartans’ stopper the wrong way.

With the first half drawing to a close, Chris Rowney tried his luck from distance with a half-volley. However, it sailed harmlessly wide of the upright.

There was still time for Blyth to have one last chance to halve the defecit before the break, but Green’s attempt was never troubling Mason.

Dale took the ball into the box just two minutes after the restart and cut back on himself, to leave him with his back to goal. The Spartans captain shot on the turn, but his effort was off target.

Poor Blyth defending had allowed Curzon to open the scoring in the first half and it nearly saw them extend their lead just 60 seconds after Dale went close for the hosts – as Horner’s calamitous header back to Jameson allowed Joe Guest to nip in and attempt to chip the intended recipient of the pass. However, Horner’s blushes were spared when the ball continued to rise up and over the bar.

The hosts put that error to one side and continued their encouraging start to the second half when Rivers tried a low shot inside the area on 51 minutes, but Mason got down well to hold.

The Ashton keeper had to be at his best twice again so after – to keep both Dale and Maguire from close range – but he was powerless to stop Spartans clawing themselves back into the contest two minutes before the hour mark.

Sensational work from Dale created an opening for the hosts by feeding Maguire. The ball then worked its way across to Fewster to turn it home, despite Curzon’s protests to the referee for offside.

Things got even better for Armstrong’s men 11 minutes later – as they drew themselves level in emphatic style, after a good advantage from Brown allowed Dale to drive forward following a foul from Ali.

Spartans’ joint-second highest ever scorer played the ball into Reid in the area, but the ball got caught up under his feet. Luckily for Blyth though, Maguire was there to take control of the situation and smash the ball past a helpless Mason.

On a day where Spartans helped collect food parcels to bolster stocks at Blyth Foodbank ahead of the Christmas build-up, Mason continued that generosity by gift-wrapping Blyth’s winning with a horrendous goalkeeping error on 75 minutes.

Rivers tried his luck from 30 yards, but the shot was straight at the Curzon keeper. Mason obviously took his eye off it though, as he allowed the ball to run through his legs and under his body – in a style akin to the infamous former Manchester United goalkeeper Massimo Taibi – to seal a fantastic comeback win for Blyth that not even the most ardent home supporter would have envisioned at the break.

Spartans will hope to replicate their second half momentum when they welcome Armstrong’s former club Stockport County to Croft Park on Tuesday evening (7:45pm kick off.)