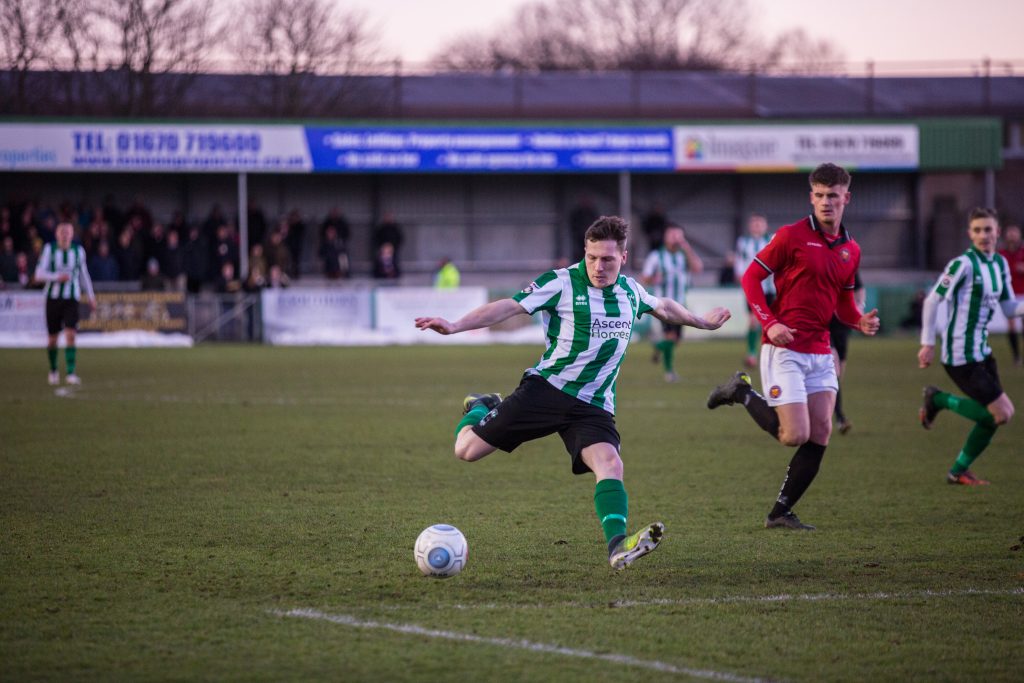 On a surprisingly mild afternoon in Blyth, the Spartans produced a dominant display to go back into the playoff positions with a thoroughly deserved performance against a Brackley side with the best defence in the league.

Dan Maguire got the Spartans off to a flying start as he finished with aplomb after only 3 minutes. The lead was doubled on 6 minutes when Jarrett Rivers arrived to slot home from Maguire’s cross. Maguire then grabbed his second on 38 minutes when he had the easiest goal of his career tapping home after Hopson’s effort had struck the post.

Blyth made two changes to the side who were defeated at Darlington on Saturday with Ian Watson replacing David Atkinson and the returning Kieran Green replacing Damen Mullen.

It took the Spartans only three minutes to take the lead. The ever industrious Jarrett Rivers did well down the right for the hosts and his persistence won a corner. The corner was taken short to Dale Hopson who smashed the ball through the six yard box and Maguire was able to deftly backheel home to the delight of the fans in Lennon Properties stand.

The lead was doubled when Jarrett Rivers was able to stab home on 6 minutes. Robbie Dale took a quick throw on the left and found Dale Hopson, the midfielder flicked the ball to Dan Maguire, who fired the ball across goal and Rivers was able to get in front of the static defence to prod home.

It took the visitors the better part of a quarter of an hour to fashion an opening and when it did came the way of Lee Ndlovu. The striker pinched the ball off his own teammate and smashed one from the corner of the 18yrd box but the effort was well off target.

The next effort fell the way of the visitors. Adam Walker picked the ball up in the centre circle and was able to advance forward past the attentions of Dale Hopson before letting fly from 25yrds out. The strike cleared the crossbar with Peter Jameson looking on without looking too concerned.

Peter Jameson was finally called into action on 37 minutes when he saved well with a strong right boot from Ndlovu. The striker was released in on goal but his effort was blocked by the home ‘keeper. The miss was to prove costly as Blyth countered.

A fantastic diagonal ball from the on-loan Gateshead midfielder, Kieran Green picked out the run of Hopson with the Brackley defence having gone AWOL. It was a two on one with Hopson and Maguire advancing on goal, Hopson took the shot on but saw his effort strike the woodwork but it fell nicely for Maguire who hesitated before slotting home.

The Saints began the second half in the ascendency and were unlucky to not pull a goal back through James Armson. The midfielder curled one from the edge of the area but the effort landed on the roof of the net with Jameson beaten.

Brackley were next to threaten again as they won a freekick 35yrds from goal. The ball was delicately clipped into the far post, where the Brackley captain, Gareth Dean won the aerial battle with Ian Watson but the header was directed straight at Jameson.

The visitors continued to press and the most dangerous player was Lee Ndlovu and he stung the fingertips of Jameson. The striker turned and fired one in at goal from a tight angle but the ‘keeper got his fingertips to the ball to avoid any potential embarrassment.

The home fans were up in arms on 65 minutes; the Brackley substitute Matt Lowe seemed to go down easily on the edge of the area and whilst the home fans claimed that it was a dive, the referee ruled it to be no more than a coming together.

Dan Maguire should have wrapped up his hat trick on 70 minutes. The diminutive forward was able to work some space as he danced his way into the box but he ended his shot lacked the composure and it was slashed over the bar.

Rivers was incensed not to have been given a penalty on 82 minutes. The former Blackpool winger was pushed over by Alex Gudger as the Blyth man went into the box with the defender nowhere near playing the ball.

There was to be no further chances for either side. The performance from the Spartans was much needed after the recent poor run of results and performances. Every single player today put in a good solid performance and the returning Kieran Green was often instrumental in the way he directed play.

The win today will have given Blyth a much needed shot in the arm as they travel to Tamworth on Tuesday evening looking to complete the double over the Staffordshire side.