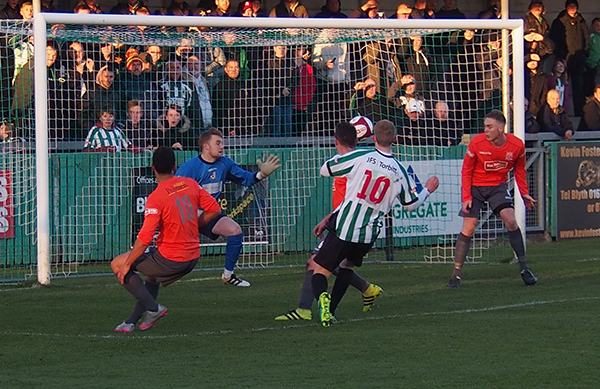 The visitors went in to the game on the back of a nine match unbeaten run and, based on the way they approached this game, it wasn’t hard to see how that impressive statistic had been achieved.

The early exchanges were fairly even although Stafford came close when Elliot Hodge turned smartly on the edge of the Blyth penalty box and fired narrowly wide of Spartans’ keeper Paul Woolston’s far post. Blyth’s Daniel Maguire then found himself free of the Rangers defence but was adjudged to have been offside. A Kyle Perry shot came close to giving the visitors the lead but Woolston was relieved to see it fly past his left hand post.

As play shifted from end to end Spartans’ Matty Pattison received a precise ball from Robert Dale but could only strike his effort directly at Adam Whitehouse in the Stafford goal. After 15 minutes Woolston was once more in the action, this time collecting comfortably a Hodge pile-driver.

Within minutes Luke Armstrong pounced to but Blyth ahead. The Stafford defence failed to clear and Armstrong was quick to get the ball out of his feet and finish accurately from eight yards. The Blyth fans were still celebrating when Armstrong put the Spartans two up only a minute later.

Maguire put the young striker in on goal. He ran unerringly down the middle of the park, side-stepped the diving Whitehouse and swiftly dispatched the ball in to the bottom corner of the net.

The visitors reacted positively to this double set back and on 22 minutes they pulled a goal back. A deep cross wasn’t dealt with and Izak Reid had the relatively simple task of heading the ball down and past Woolston.

On the half hour mark both sides came close to scoring when, first, a Kris Taylor free kick was held well by Woolston before a Dale effort was only just cleared by Kieren Morris.

However, it was Stafford who did score when, after 36 minutes, the Blyth defence allowed a long high ball to drop over their heads and grateful Reid capitalised with a fine driven effort which sailed beyond Woolston’s right hand.

In the dying minutes of the first half both sides came close. A beautifully flighted Dale effort seemed destined for the top corner of the goal but was somehow headed away before Blyth’s Andrew Cartwright needed to react swiftly to clear a dangerous Kyle Perry cross and his teammate Stephen Turnbull had to alert to head away from goal as the visitors pressed.

After the break Blyth came out with more determination and playing at a higher tempo. Damen Mullen fired over from 25 yards before a superb Pattison shot was very well saved by Whitehouse. Collecting a Dale cross Maguire then could only guide his header just wide.

Blyth’s efforts were rewarded on 68 minutes when Armstrong was brought down in the box. Taking the resulting penalty himself his effort was blocked by the goalkeeper and the danger cleared.

Pattison again came close before Spartans’ defender Nathan Buddle was on hand to head the ball off Woolston’s goaline. The game continued to be an entertaining affair as Richard Batchelor, for Stafford, drifted past two Blyth defenders only to rush his shot and slice wide.

It was the hosts however who looked the more likely to snatch a winner in the final ten minutes.

Dale did well to pick out Pattison on Blyth’s right and the South African pulled out another excellent save from Whitehead. The former Newcastle United and Norwich City player then had another effort lashed away before Blyth substitute Sean Reid acrobatically fired over. Defender Richard Pell, on for Ryan Hutchinson could just not enough purchase on this back post header before, in the final minute, Dale snatched at his left foot effort and failed to trouble Whitehouse.

A 2-2 draw was probably a fair result in an eventful, keenly fought and intriguing encounter.