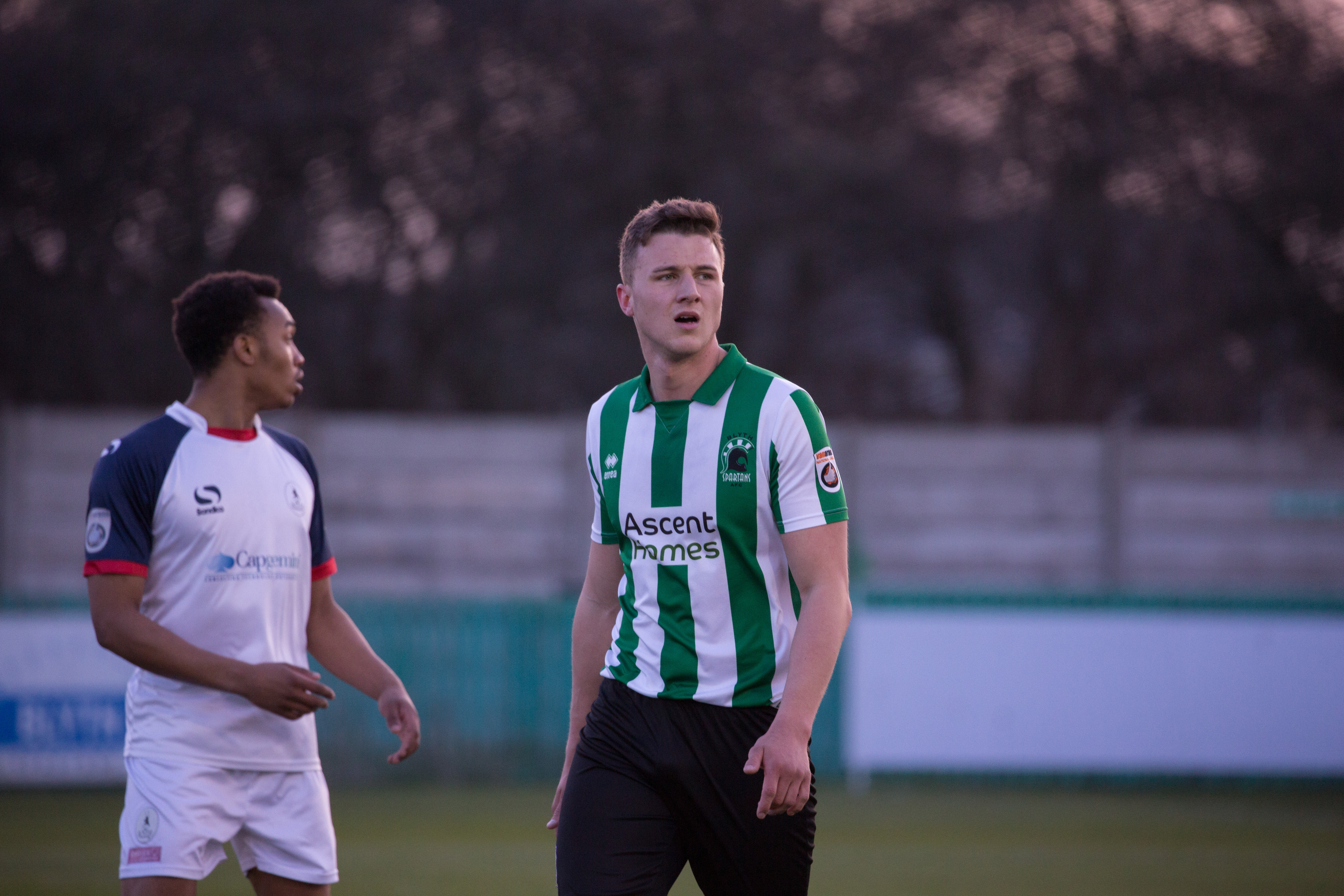 Port of Blyth man of the match Nathan Buddle opened the scoring with a 30-yard late contender for goal of the season with 22 minutes gone, before Damen Mullen tapped home from a few yards out just after the hour mark to set Spartans on their way to a second win in three games.

Ben McKenna halved the deficit from the penalty spot in second half stoppage time to set up a nervy finish, but Blyth claimed the three points that kept their slim playoff hopes going for a few more days – after Spennymoor Town lost at home to AFC Telford United.

Spartans boss Alun Armstrong was forced into two changes for the visit of the Lancashire outfit – after both Jordan Laidler and Jarrett Rivers suffered injuries in Saturday’s 1-0 reverse against Stockport County. David McTiernan and Adam Wrightson took their places as they did at the weekend, but Andrew Cartwright was able to shake his niggle off to keep his place in the starting XI.

The visitors started the brighter of the two sides and had two early corners within the first minute. However, Blyth dealt well with them both.

Joe Guest had a speculative pop from distance moments later, but his effort was high, wide and not at all handsome.

The hosts had to wait until the 12th minute for their first sniff of an opportunity when Robert Dale had his shirt pulled just inside the away half. The Spartans’ captain’s early spot looked to pick out a leaping Sean Reid in the area, but Cameron Mason matched him for height and was able to gather well with his hands.

Daniel Maguire did well to bring down a long ball inside the box a minute later, but scuffed what was a difficult shot wide of the goal.

A mis-placed Ashton pass on 22 minutes not only gave Spartans the lead, but a late entry for goal of the season.

Coming back from an earlier corner, Buddle picked up possession halfway inside Curzon territory. He opted to shoot from 30 yards and a slight deflection helped see the ball past Mason, as the centre-back calmly turned to the Port of Blyth stand with his arms outstretched to drink in their applause.

Buddle nearly went from hero to zero just three minutes later though, when he opted to leave Oliver Thornley’s ball into the box for Peter Jameson. The keeper remained static as Ryan Brooke dived in at the back post, but the striker couldn’t get there.

Jake Dunwoody struck a well-taken shot from the edge of the area, but that man Buddle was involved again to block it away with his foot.

Having seen what his teammate could do from 30+ yards, Reid hit his 35-yard free kick straight at goal looking for the top corner just after the half-hour. He could only watch as it flew just wide of the post though.

Dale chipped in another set-piece moments later and picked out Buddle at the back post. Looking for his second goal of the evening, the defender only managed to hit the side netting from a tight angle.

The visitors were nearly level on 35 minutes, when James Baillie fed Brooke well with a ball into feet and his back to goal. The forward turned well on the ball and shot through Buddle’s legs, but Jameson was more than alert to the danger and got down well to save.

Another Dale free kick saw the talismanic Spartan go for goal from the edge of the area. Trying to outfox Mason, Dale struck it towards the far side but the keeper produced an excellent diving save to palm the palm around the post and ensured his side went into the break just one goal behind.

Blyth’s captain twisted and turned his way past two and looked to pick out the head of Maguire four minutes after the restart, but the forward lost out in the air to Jonathan Hunt.

Maguire then put through Michael Liddle in the away side’s box moments later, but he couldn’t keep his strike on target.

On 55 minutes, Baillie cracked one towards goal from 20 yards, but it was never troubling Jameson as it went well wide.

Curzon’s night went from bad to worse three minutes after the hour mark – as they found themselves another goal behind.

Blyth’s Wrightson produced a great piece of play to get inside the area and looked certain to cap his run with a goal, but Mason got down low to tip his shot away. The ball rolled straight to the feet of a grateful Mullen, however, who had the simple task of rolling the ball into an empty net.

Cartwright then had a pop shot from distance on 66 minutes, but he was unable to pick out the top corner; much to the relief of Mason.

Youngster Jack Butler – who’d replaced McTiernan on 79 minutes – gave the Croft Park faithful a glimpse of what they might see more of next season when he produced a tremendous piece of play to get in down the left. He cut the ball back on the by-line to Wrightson, whose hard first time strike was blocked behind by Daniel Shaw.

Spartans had a penalty shout turned down for handball in the 90th minute, when referee Paul Brown adjudged that Shaw had not intentionally diverted Ian Watson’s goal-bound shot away from its target with his hand.

However, Brown was left with no choice but to point at the spot down the other end a minute later – after David Atkinson fouled Matthew Crothers in the area. McKenna stepped up and stroked his penalty home, sending Jameson the wrong way and giving Ashton a late consolation.

With Blyth’s home schedule for the season now complete, Spartans travel to Nuneaton on Saturday afternoon hoping that their slim hopes of making the Vanarama National League North playoffs are still alive by the time they take to the pitch (3pm kick-off.)