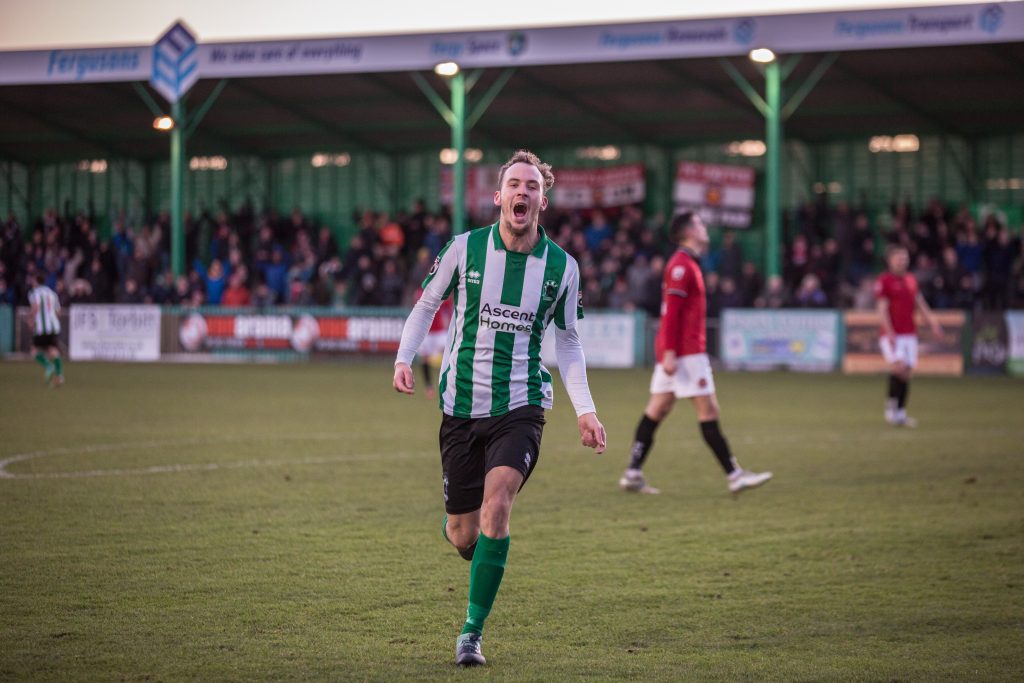 Despite a spirited performance from an injury-hit Blyth Spartans, two goals on the counter-attack from the Harriers duo of Ryan Croasdale and Emmanuel Sonupé in a frantic second half condemned Spartans to a fifth straight Vanarama National League North defeat.

Midfielder Sean Reid did net for the third game running with an 87th minute consolation – his 50th for Spartans – but it was not enough for Alun Armstrong’s side to stop the rot.

Spartans wore their commemorative home strip – originally scheduled to be worn against Southport – in honour of the 1977/78 side that made the fifth round – ironically a 2-1 replay defeat to Wrexham in front of 42,000 at St James’ Park.

And Armstrong made four chances from the side that lost to Harrogate Town on Monday afternoon – Hopson, Watson, Atkinson and Wrightson inserted into the starting lineup.

It was a cagey opening to proceedings, with the centre-back pairing of Joe O’Connor and Fraser Horsfall seeing a lot of possession at the back for Kidderminster, the former looking to unleash diagonal balls towards Andre Brown for the majority of the first half.

At the other end Spartans looked to create through the enigmatic duo Hopson and Reid. Hopson created the first chance of the game on the quarter hour mark – lofting a right wing free-kick into the penalty area – Buddle rising highest but unable to hit the target with his header.

A minute later Harriers winger Elton Ngwatala breached the Spartans back four – but a last ditch Watson challenge slid the ball into touch before the Kidderminster forward could take aim.

It was set to be a half of few chances, and the next one fell to the hosts. A fast flowing move – almost from nothing – almost provided reward when Jarrett Rivers picked out Hopson on the edge of the area – the midfielder unable to keep his strike on target as it skimmed over the bar.

Three minutes later Wrightson could – and should – have done better after a floated ball from Hopson allowed him to break in behind the organised Harriers defence – but the makeshift centre-forward punted the ball wide.

On the stroke of half time a moment of magic from captain Robert Dale almost broke the deadlock. His mazy run saw him leave three defenders in his dust before relaying the ball to Hopson on the edge of the area – the former Whitby man’s effort blocked by a sliding Horsfall.

Early in the second half Kidderminster had a golden opportunity to take the lead. O’Conner’s diagonal ball found Brown in stride in the penalty area, but the forward lost his footing and Spartans cleared.

Dale went close on the hour mark – creating space on the left edge of the penalty area – he chopped the ball onto his right foot and curled the ball towards the top right hand corner, the ball a whisker away from giving Blyth the lead.

A minute later it was Wrightson who tested Hall, but his tame effort from inside the area was comfortably saved by the Harriers stopper.

Moments later, the visitors took the lead somewhat against the rune of play. Joe Ironside picked up the ball on halfway – turning his man down the left flank before marauding towards goal. He picked out Croasdale on the right edge of the D – stroking a right footed effort into the bottom left hand corner, Jameson with no chance of making the save.

Wrightson was denied once more by Hall before substitute Sonupé doubled the lead. Nathan Buddle was unable to control a ball forward and Sonupé pounced – scampering towards the right edge of the penalty area before floating a ball over the head of Jameson from an acute angle – a fluky cross or a sublime finish.

Spartans had the wind taken out of their sails and it took until five minutes from time for a response. Wrightson’s right wing corner was flicked on by Damen Mullen – Reid on hand to divert the ball home for his 50th in a Spartans shirt.

A minute into injury time Reid almost salvaged a point, his head effort looked destined for the top corner before Hall plucked the ball out of there.

Two minutes later a Dale diagonal ball fell at the feet of Wrightson who controlled past a defender in the area before swiped a left leg at the bouncing ball – his effort summing up Spartans day as it flew wide of the mark.

An encouraging performance, but defeat sees Spartans drop a place to 9th in the National League North. Next up Spartans host Southport on Tuesday evening – a 7.45pm Kick-Off.