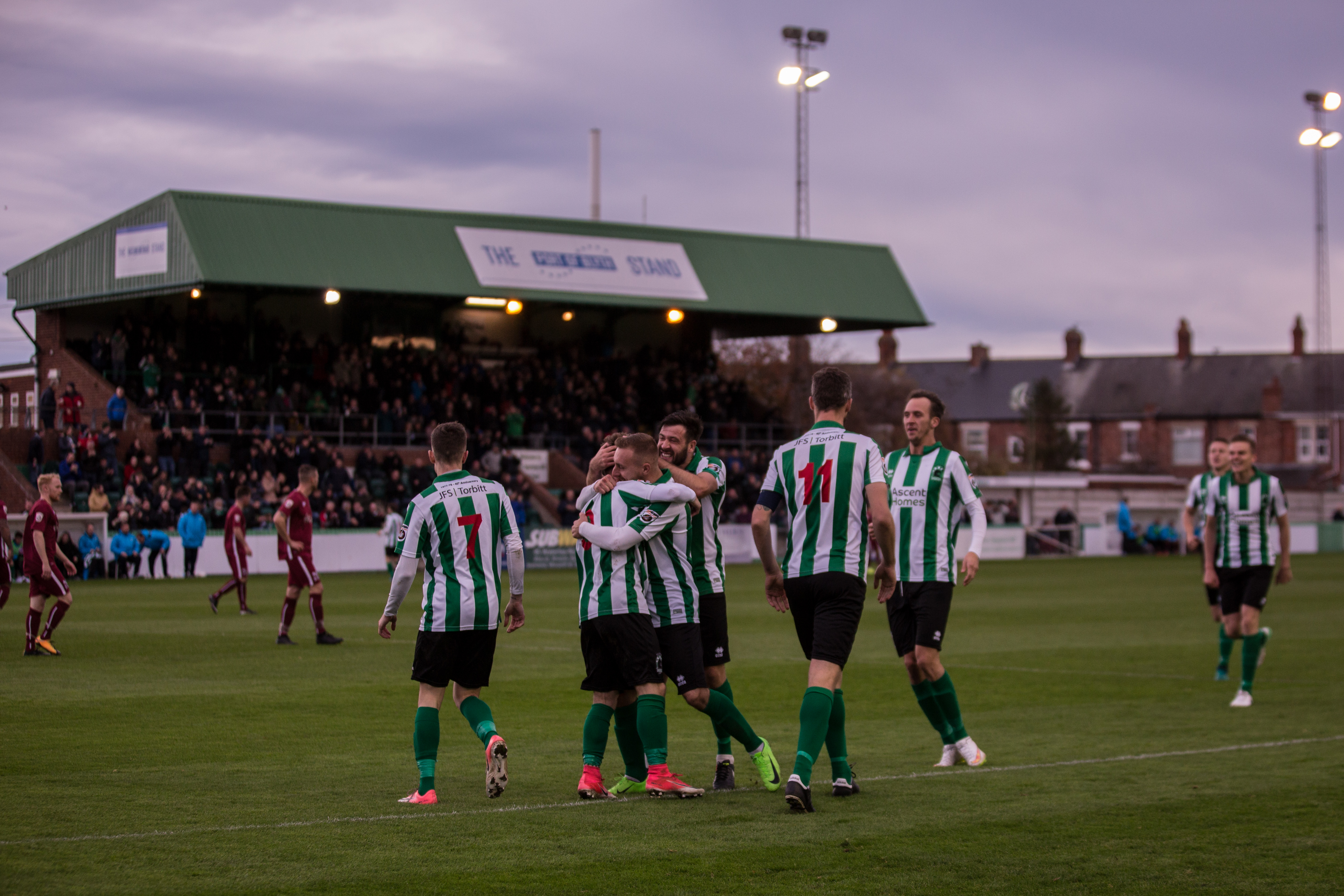 Blyth Spartans returned to winning ways on Saturday afternoon, with a professional performance that saw them edge a 1-0 win over a battling Leamington side.

In an usually goal-shy game at Croft Park in recent times, Spartans had visiting defender Junior English to thank for the three points – after he turned Robert Dale’s cross into his own net 20 minutes in.

A resolute Spartans were pushed all the way by their Midlands-based opponents, but they did just enough to claim their 11th win from 18 games so far in the Vanarama National League North this season.

Alun Armstrong made three changes to the side that was comprehensively beaten 4-1 by Bradford Park Avenue seven days earlier, with Michael Liddle’s selection seeing him make his 50th appearance for the club. David Atkinson made his first start since returning to the club from IBV Vestmannaeyjar in Iceland, while Damen Mullen also returned to the starting line-up.

Leamington had a 230-mile trip to get to Croft Park, but they didn’t look to be suffering any sort of travel tiredness – as they nearly took an early lead with just four minutes gone.

The ball bobbled about in the box following the initial clearance from Kaine Felix’s corner and into the path of Liam Canavan, who was denied a certain goal by an instinctive diving save from Peter Jameson that saw him desperately tip the ball behind for a corner.

Jameson then flapped at the cross from the resulting corner, but referee Leigh Doughty blew for a foul on the keeper before The Brakes could capitalise.

Spartans’ first opportunity also looked to come from a corner three minutes later, with Jarrett Rivers playing it short to Dale Hopson. The midfielder looked for the return ball with a clever back-heel that caught out the visiting back-line, but not the offside flag.

Leamington’s Rob Thompson-Brown then had Jameson scrambling on 12 minutes, when he connected with a lovely volley from the outside of the area from a clearance. However, the Spartans keeper was able to watched the driven shot fly harmlessly past the upright while diving down to his left.

A visiting player was then able to finally find the back of the net eight minutes later, but – to the despair of the away dugout – it put Blyth ahead.

Michael Liddle’s quick throw released an advancing Dale, whose good run down the left saw him into the box. The Blyth captain’s low cross flew across the box and bounced off the body of English, who could only watch as he diverted the ball into the roof of his own net.

Dale looked to go one better just prior to the half-hour mark, when he found himself in space 35 yards out with the ball at his feet. No stranger to the spectacular, he unleashed a rocket of a shot that just cleared the crossbar and a relieved Tony Breeden.

The talismanic winger was in the thick of the action again with 36 minutes on the clock, when he successfully charged down a clearance that fell well for him to run on to. He got into the box once again and opted to shoot this time, but he hit it straight at the keeper from a tight angle.

Jarrett Rivers proved a threat down the other wing and looked to have set up Spartans’ second of the afternoon three minutes later, when his cross picked out Adam Wrightson on the penalty spot. However, the makeshift striker dragged his shot wide of goal across Breeden.

Leamington kept plugging away as the first half drew to a close and were nearly rewarded for their persistence when James Mace was picked out free at the back post on 44 minutes. The right-back looped a header back across goal, but it bounced away for a goal kick.

There was still time for Hopson to nearly profit from Rivers’ quick corner moments later. The winger got the ball back off Atkinson and crossed in, but the former Whitby midfielder was unable to double Blyth’s advantage before the break – after getting too much under the ball, with the ball bouncing up over the bar.

Blyth’s defensive display in the first half was a marked improvement from their horror show at Bradford in their last game, but they threatened to slip back into bad habits three minutes after the restart. A short pass from Atkinson put Buddle under pressure, but the centre-back was able to just clear the ball behind before Kurtis Revan could punish the mistake.

The resulting corner nearly put Leamington level, when Revan struck at goal. However, Ryan Hutchinson got a block in to stop the ball going in and the home side were able to clear their lines soon after.

Dale had been the driving force in much of his side’s attacks and that continued in the 52 minute, when he tried to curl a shot around Breeden and into the top corner. Unfortunately for him though, the ball just evaded its intended target.

The visitors step up their intensity to try and get back into the game and it looked like it might pay off just after the hour mark, when Sean Reid mis-hit a volley trying to clear a ball in the box. The lofty midfielder had Jameson to thank for digging him out of trouble though – as the keeper raced out to smother the ball ahead of any blue bodies.

Thompson-Brown battled well with Atkinson to beat him to the ball with 19 minutes to go, which afforded him the chance to run into the area. Getting in left of goal, the winger wasted his chance – as he thrashed a left-foot drive wide of the near post.

Chances were at a premium in the closing stages of the match, but Rivers still had time to produce a magical piece of trickery that left three Leamington players standing on 87 minutes. However, his cross was just too near to Breeden.

The visitors could easily have been a goal down and a man down two minutes later, when Jamie Hood shunted substitute Greg Rutherford into the side fencing with some force. It looked a bad one and had the Croft Park faithful baying for a red card, but Doughty showed the defender only a yellow.

Rutherford looked to have ended an eventful period of added time with his first goal for the club in the last of four added minutes at the end of the 90, when he turned home from a few yards out from a free kick. The offside flag might have denied him, but that disappointment lasted mere seconds – as the full time whistle sounded soon after.

Blyth will surely look to build on this performance and record back-to-back wins next Saturday, when they travel to Southport for a 3pm start.