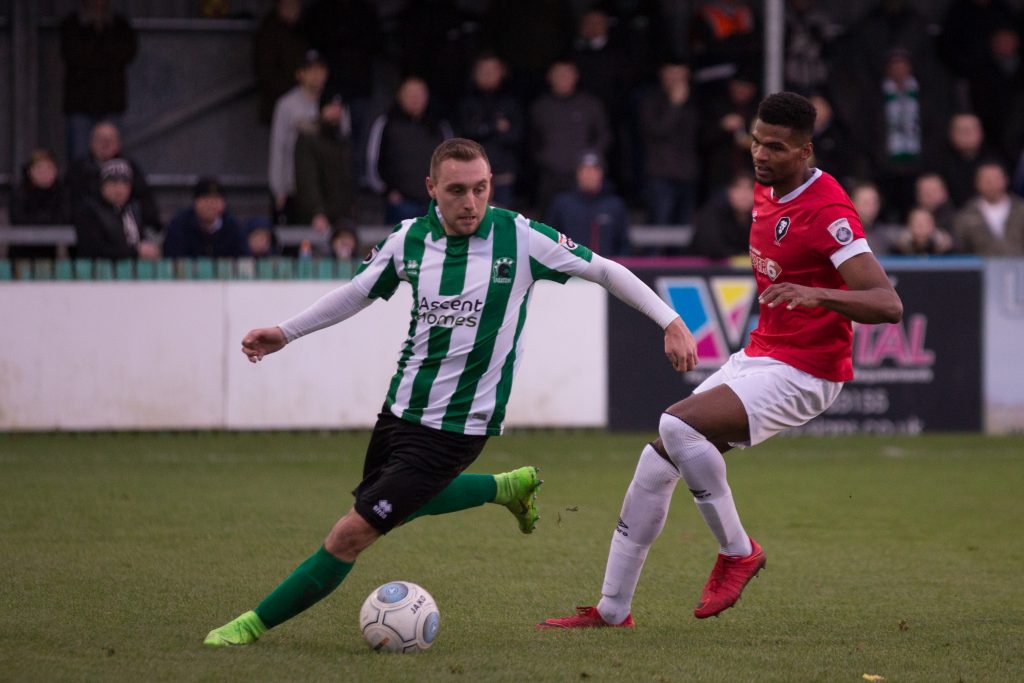 Blyth Spartans sealed their place in the 2nd round of the Buildbase FA Trophy after a hard fought win over a workmanlike AFC Telford United. Dale Hopson scored the only goal of the game in the 9th minute when Dan Maguire was adjudged by the referee to have been caught by Aaron Hayden just inside the 18yd box.

Telford win a free kick just inside the Blyth which was floated forward. The ball falls for Sylvan Ebanks – Blake but his left footed effort was dragged wide of Shaun MacDonald’s near post.

Blyth took the lead somewhat against the run of play in the 9th minute as Dan Maguire was tripped just inside the 18yd box and Dale Hopson stepped up to roll the ball into the bottom right hand corner. The unlucky Aaron Hayden led the protests to the referee Samuel Barratt.

It was fairly quiet after the two chances that had fallen to either side; however, the visitors looked very comfortable knocking the ball around but without causing much distress in the Spartans backline.

On 23 minutes, Dale Hopson skipped past a challenge of Shane Sutton before being faced up by Aaron Hayden and Connor Johnson. Hopson shimmied one way and then the other before curling an effort that was easily gathered by Singh.

It was only 2 minutes later as the visitors came forward down the right with the full back Ross White. White whipped in a vicious ball that skidded through the 6yd box but no one was able to get a touch from either side.

On the half hour, the visitors won a dangerous free kick just right of centre as Ebanks – Blake went down under pressure from Hutchinson. The free kick was curled low by Leonard, it took a wicked deflection off the wall and hit the near post with MacDonald beaten. Fortunately for Spartans the ball came back into play and was safely cleared. In the buildup to the free kick, there were vociferous appeals for a handball against Ebanks – Blake which fell on deaf ears.

Spartans looked to up the ante in the run up to halftime as Jarrett Rivers and Robbie Dale both went close to doubling the lead. First, Rivers lobbed a hopeful ball towards the far post with Singh out of position. Dale then volleyed a ball into the ground following some goalmouth pinball after a dangerous corner from Rivers.

Spartans looked comfortable as they headed into the interval and Robbie Dale went on a mazy run down the left wing and got to the by-line before cutting in. It took a last ditch clearance on the line by the Telford captain, Shane Sutton to keep the score at 1-0.

The visitors started the second half impressively. Only 30 seconds into the second half, John Marsden got into the box and saw his effort blocked well by Nathan Buddle. Seconds later and Telford won a succession of corners with the first cleared by Robbie Dale and the second claimed by MacDonald.

Blyth made the first change in the 57th minute as Dale Hopson was replaced by Kieran Green. The decision saw a slight change in tactics as Sean Reid pushed further and Green taking a more defensive position.

Ross White picked up the first yellow card of a relatively calm game as he chopped down Sean Reid as the midfielder looked to push forward and set up another Spartans attack.

The visitors made a change of their own just after the hour mark as Marcus Dinanga replaced the ineffective Ebanks – Blake. The change almost paid dividends as Dinanga offered a different attacking threat; his cross was attacked by Marsden but his glancing effort flew wide of the far post.

MacDonald had been largely untroubled in the game but when he was called upon in the 67th minute as a cross by Newby was punched clear by the home custodian as Dinanga lurked.

Dan Maguire who had been quiet in the game was clattered on the edge of the area by Shane Sutton. Robbie Dale lined up the freekick but his effort was curled through the wall and Singh was able to claim the ball comfortably.

As the game entered the final 10 minutes, Telford pushed forward going in search of an equaliser as they replaced Aaron Hayden with Anthony Dwyer.

John Marsden who looked dangerous throughout the game was again able to fire a shot towards goal. Fortunately from a Blyth point of the swerving effort dipped over the crossbar with MacDonald breathing a sigh of relief.

Jarrett Rivers had a fantastic opportunity to seal the game as the clock ticked into the 90th minute. The referee played a good advantage as Sean Reid was caught late, the ball rolled to Rivers who smashed the ball wide from the 18yd box with only Singh to beat.

Into added time and Max Leonard struck an effort from the edge of the area that despite taking a deflection was well held by Shaun MacDonald.

The referee soon blew the final whistle after that chance for the visitors as Blyth sealed their place in the next round and a home tie against Bromley which will be played on Saturday 13th January.

Next up for the Spartans is a tricky away trip to face York City in the Vanarama National League North on Saturday.