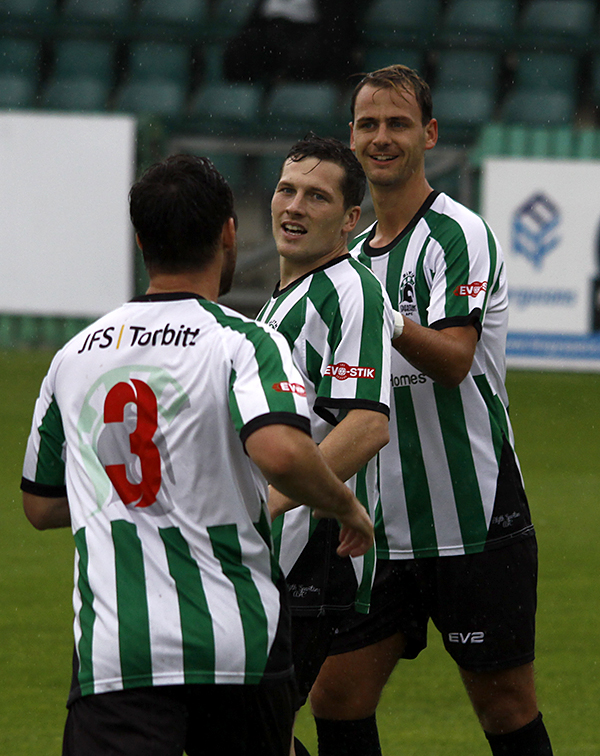 Blyth Spartans lost their first home game of the Vanarama National League North season – after an impressive York City side ran out 2-0 winners in front of a bumper Croft Park crowd.

With 1373 in attendance, Jon Parkin struck after 15 minutes to put a dent in Spartans’ promising start to the first half – following missed chances from both Daniel Maguire and Macaulay Langstaff, who was making his debut for the club after completing a loan move from Vanarama National League Premier side Gateshead earlier in the day.

Sean Newton doubled up for the former Football League side seven minutes later from the edge of the box, to inflict the reigning Evo-Stik Premier League champions’ second consecutive loss since their return to the National League.

To the relief of all the home supporters, Maguire passed a pre-match fitness test and was named in the starting line-up alongside Langstaff , with the 20-year-old being brought in as a replacement for the injured Jordan Laidler. Peter Jameson also made his first appearance for the club between the sticks, at the expense of Shaun MacDonald.

The two sides only previous meeting had been in an FA Cup First Round meeting back in 1978, so it was fitting that York were in attendance for the impeccably observed minute’s silence for legendary former Blyth Spartans manager Jackie Marks prior to the start of the first home game of the season.

Spartans nearly conceded early at Alfreton on Saturday, but they were nearly the ones to draw first blood inside a noisy Croft Park, when Michael Liddle crossed in from the left on two minutes. Young striker Langstaff met it at the near post and executed a speculative backheel, but couldn’t find the target.

From the resulting goal kick, the FA Trophy holders carved out their first chance of the evening, with a poor pass from Ryan Hutchinson inside the Blyth box ending up with Simon Heslop on the right. He teed up Parkin to strike, but the cult hero striker placed his shot horribly wide.

More confusion reigned in Blyth’s back line on eight minutes, when Jordan Watson slid in to clear a cross that seemed to be a comfortable hold for Jameson. The ball ran to the feet of Amari Morgan, but Buddle blocked his shot away to eradicate the danger.

Robert Dale flicked on Jameson’s 12th minute clearance straight into the path of Maguire, who had broke through the York backline to get in one-on-one. ‘Nipa’ had time to pick his spot, but the advanced Jon Worsnop produced a great save to keep Blyth at bay.

The City stopper had to be at his best again seconds later, when Maguire forced him into another fine save. The rebound fell to Langstaff, but he shot just wide when some of the fans in the ground thought it was in – after hitting the back of the net via the fence behind the goal.

Spartans were enjoying a decent spell of possession, but York landed a counter blow on the quarter-hour mark and punished the hosts with the opening goal. Louis Almond fed the ball to Parkin, who hit a low first-time shot across Jameson and into the far corner of the goal.

Things got even worse for Blyth seven minutes later, when York doubled their lead with a fine strike from Sean Heslop.

The York captain drilled a shot towards goal from the edge of the area, which Jameson got down low to get a firm hand on it. Unfortunately for the former Darlington stopper, he could only divert the ball up into the roof of his net.

Rivers was picked out perfectly in space in the City box on 25 minutes and looked certain to test Worsnop, but opted to pass to Maguire instead. The ball ended back up with the winger further wide seconds later, but he shot wide across goal.

Rivers went closer to scoring just after the half-hour mark, but his effort was headed clear by Alex Whittle. The ball went as far as Langstaff just inside the area, but the loanee shot wide once more.

Parkin’s tame header produced a comfortable stop for Jameson, but the Blyth keeper was called into a fine diving save moments later – after Morgan-Smith hit a low one across goal from the left. Liddle was then called upon to clear, before Almond could take advantage of the rebound.

A missed interception from Liddle down the left put Morgan-Smith through again on 41 minutes. He raced into the area but, with just the keeper to beat,  he fizzed a shot wide when he really should have done better.

With the half-time whistle approaching, Lewis Horner picked the ball up at the edge of the area and looked to try and halve Spartans’ deficit before the break. However, he blazed an effort well off target and Blyth went in two behind.

York looked strike early in the second half, when Almond and Newton linked up with a clever one-two two minutes after the restart. The former shot low towards goal, but saved well.

A good run from Hutchinson saw the right back into the area, following a give-and-go with Langstaff on the hour mark. He looked likely to pull the trigger on a shot, but Adriano Moke’s touch on the ball did just enough to divert it away in the nick of time.

Fellow defender Buddle had the ball drop nicely for him in the box three minutes later, but – almost as a symbol of Spartans’ disappointment so far – his shot was blocked away by the foot of Maguire on the way through.

Substitute Kaine Felix was the next City player to be guilty of a horror miss – after a neat attacking move involving Morgan-Smith and Connor Smith from the visitors saw the striker in at goal. Trying his luck from wide of the goal, he placed it wide and left Jameson without a save to make.

Smith was instrumental in York’s follow-up chance with 12 minutes to go, as he flashed a good ball across the face of Blyth’s goal. Felix desperately slid in trying to get a touch to turn it home, but the ball sailed harmlessly past him.

As the game wound down towards 90 minutes, Maguire crossed in looking for Dale at the far post. However, Josh Law was able to intercept and force the ball behind for a corner.

In the last minute, Watson’s header from a corner forced Worsnop to punch clear off the line. The ball went as far as Dale on the edge of the area, but the Spartans captain’s overhead kick didn’t trouble City’s stopper.

There was still chance for the hosts to grab a consolation when Hopson fed Maguire in injury time, but Maguire blasted his shot high into the air and couldn’t test Worsnop.

York’s keeper handled outside his area with seconds remaining, to give Spartans a free kick. Hopson’s drilled effort into the six-yard box bounced off McTiernan, but fell just wide of the upright.

After two consecutive defeats, Blyth will hope for better when they entertain Tamworth on Saturday afternoon (3pm kick off.)