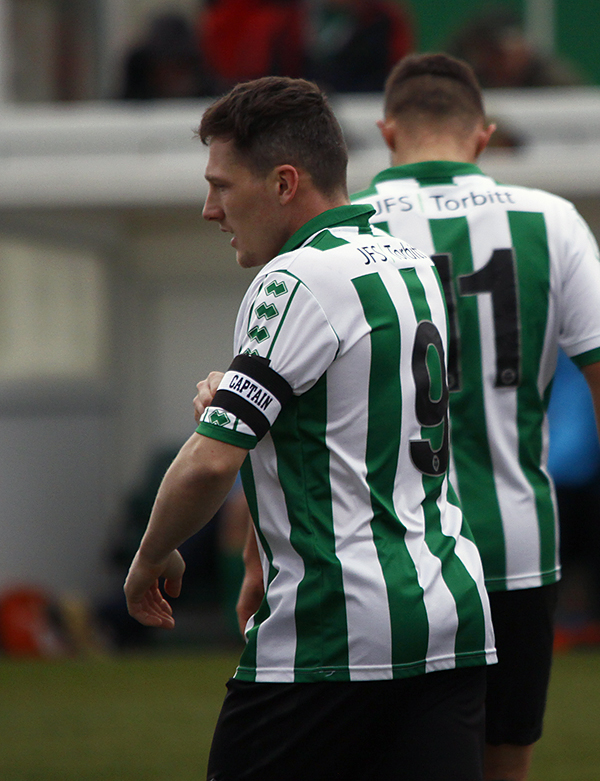 Daniel Udoh blasted Telford ahead in the 18th minute after being played in by James McQuilkin, before Maguire stabbed home Spartans’ leveller with two minutes left.

Manager Alun Armstrong, perhaps with Monday’s match with Curzon in mind, made four changes from the side that dispatched Ashton last weekend.

And it took some time for Spartans to settle with Telford starting the quicker and subjecting the away side to some early pressure, coming closest through Ryan Barnett as his shot was deflected narrowly wide.

However, out of nothing, Spartans could’ve found themselves in the lead 14 minute in. Robbie Dale flicked the ball through a static Telford defence to Kieran Green who forced Josef Bursik into a smart save, then a minute later Alex Nicholson had an effort ruled out for offside.

But as Spartans began look the more threatening they suddenly found themselves behind. McQuilkin latched onto a stray pass and dinked a great through ball to Udoh who made no mistake and lashed home his 18th goal of the season.

Sean Reid replaced the injured Conor Oliver after 24 minutes and almost made an instant impact, only to see his glancing header hit the post.

Telford began to build a head of steam before half time, with the best of their chances falling to Marcus Dinanga who forced a great save from Peter Jameson.

And Jameson was called into action again early in the second half as he pulled off a fine reaction save to deny Udoh a second.

After pushing for a second early on, the home side seemed content enough protecting what they had, with the game becoming rather scrappy for most of the second half.

However, Spartans had a golden opportunity 15 minutes before the end. Maguire twisted and turned in the box before firing a low ball across the face of goal. Dale looked to have had the easiest of finishes but the onrushing Brendon Daniels did just enough to put him off.

Spartans then made no mistake two minutes before the end. The Telford defence just about coped with a series of crosses, before the ball was only cleared as far as Jarrett Rivers, with the winger’s low cross converted by Maguire to ensure Spartans went home with a point.