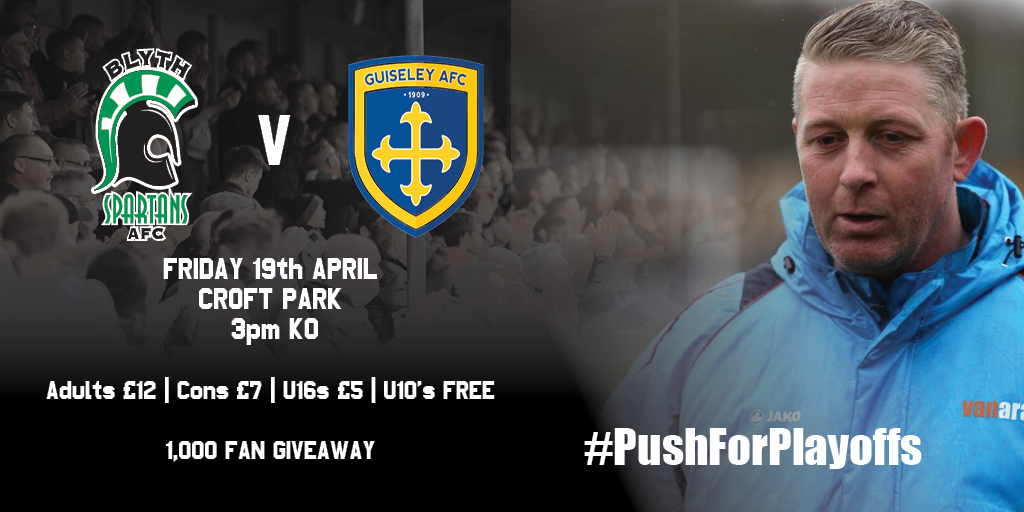 Fresh from their stunning win away to league leaders Stockport, Blyth Spartans will be seeking a fifth straight victory as they take on Guiseley at Croft Park on Good Friday.

Spartans’ late season surge has seen them rise up to eighth in National League North, just one place and three points behind Telford United in the final play-off spot, with three matches remaining. Meanwhile, relegation threatened Guiseley sit just once place above the drop zone, but with a four point buffer between themselves and Ashton United in 20th.

The reverse fixture in October saw Spartans run out 3-1 winners at Nethermoor Park with Aaron Cunningham getting an early goal, before a brace from Dan Maguire secured the points.

The visitors have endured a somewhat difficult year in 2019, only registering two league wins, however they do have the most draws in the league (17) which has so far done enough to keep them just out of the relegation zone.

Guiseley’s last outing saw them miss a fantastic chance to all but secure safety as they drew at home to Ashton United. Kingsley James put the hosts ahead with a penalty 12 minutes before the end as they looked on course to put a seven point gap between themselves and the visitors, however, they were thwarted just five minutes later by a Sam Sheridan free kick that ensured a share of the spoils.

This will be the 27th encounter between the two sides, with Spartans winning eight and Guiseley 11. The last meeting in October 2018 was the first game between the sides in almost seven years as Spartans ended a streak of five games without a victory.

Perhaps the most memorable encounter between the sides was in October 1995 as Spartans triumphed 2-0 in the FA Cup 4th Qualifying Round. The victory paved the way for their run to the Second Round where they were knocked out by Alun Armstrong’s Stockport County.

Joint managers Marcus Bignot and Russ O’Neill have been in charge since May 2018, following Guiseley’s relegation from the National League.

Bignot, a former QPR player, had a successful five year tenure in charge of Solihull Moors, before a short spell at League Two side Grimsby Town. O’Neill has previously been in charge at fellow National League North side Alfreton Town, as well as working within the player recruitment department at Burnley.

Kingsley James in Guiseley’s joint top scorer with five goals to his name so far this term after signing from fellow National League North side Chester last summer.

James has extensive National League experience for sides such as Hereford and Macclesfield, as well as making a solitary League Cup appearance as a youngster for Sheffield United.

Striker Dan Maguire is just one goal away from making it 160 for Spartans. Maguire is currently third in the National League North goalscoring charts with 20, three goals away from Spennymoor Town’s Glen Taylor.

Adam Wrightson is currently two games away from hitting a century of appearances for Spartans.