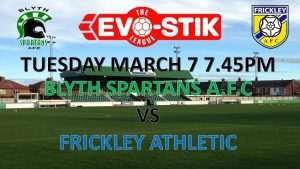 Blyth Spartans look to bounce back following successive league defeats for the first time since September. Frickley won the reverse fixture 1-0 being on the back foot for large parts of the game.

Spartans surrendered a 2 goal on Saturday at the hands of Sutton Coldfield Town. A brace from Luke Armstrong had put Blyth into a commanding lead but were left reeling as their relegation threatened hosts came back to win 3-2.

Our visitors tonight Frickley tasted their 1st defeat in 5 games as they lost 1-0 at home to Hednesdord Town. A late goal from Danny Glover gave the visitors the points.

Manager Alun Armstrong may look to ring the changes following the defeat on Saturday.

Lee Morris – Former pro with Derby County and when signed was the 4th most expensive teenager in British football. Previously in charge of Solihull Moors and Loughborough Dynamo.

Adam Priestley – The on-loan Alfreton Town striker is a full international for Gibraltar. He could be the spark needed by Frickley to fight off the threat of relegation.