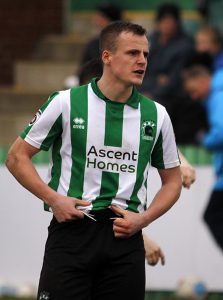 Green, who joined permanently from Gateshead last month, was keen to praise the attacking pair after their impressive performance – both finding the scoresheet in their full debuts at Croft Park.

Holmes – occupying a central and wide left role – showed flashes of brilliance throughout – and grabbed a deserved goal shortly after Sean Reid had given Spartans the opener on 11 minutes.

Fewster, who saw an effort cleared off the line in the first-half, made no mistake in adding Blyth’s third early in the second-half when Holmes held off the challenge of two Ashington defenders.

Less than a minute later, the former Spennymoor striker fired his sixth goal in just three pre-season games when he capitalised on Dan Maguire’s assist to find the bottom right corner.

And Green explained why he is impressed with the two: “Brad and Jamie are great additions and both bring a lot to the squad,” said Green.

“Brad is a great finisher. He is very good at coming short and linking up – he also can play on the shoulder and make clever runs.

“Jamie is also a good finisher and a very clever footballer who is always looking for the ball. He puts a shift in off the ball and chips in with the defensive duties.

“They will have a lot of success in this team in the coming season.”

Green himself looked lively – reminding Spartans supporters of the quality he possesses – providing an eye-of-the-needle pass to Fewster before he was denied by Ryan Bell on the goal line.

And after returning to Croft Park, Green said it “felt good to be back” in what was a “controlled” performance.

Green said: “It felt good to be on the pitch again playing in front of the fans. I really hope we can give the fans a season they deserve.

“I thought we played well, and we controlled the game from start to finish. We are happy to win the game but more so the performance.

“It’s not so much the scoreline in pre-season, it’s getting in a habit of playing the right way. We need to get into good habits on and off the ball and pre-season is a good opportunity to put that into practice.

“I’m really enjoying preseason it’s been tough but enjoyable. I’m feeling good I still need to get a bit sharper – but that will come the more games I play.

“We have a good squad and have new faces that are all fitting in well. We are starting to build a good team spirit that will only get stronger the more we play and train together.”

Up next for Armstrong’s men is a trip to Evo-Stik Premier Side, South Shields – arguably Spartans biggest test of pre-season so far.

“South Shields are a good outfit,” the former Hartlepool man believes.“We know it will be a good test and opportunity to try and play how we have been against a very good side.”