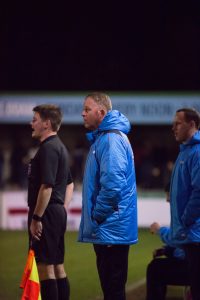 Blyth Spartans manager Alun Armstrong believes his players “will be in a better frame of mind” when they travel to York City on Saturday in this season’s reversed fixture.

City, managed by Gary Mills at the time, earned a 2-0 victory at Croft Park back in August, but of course, a lot has changed since then.

Armstrong has guided Spartans into the top four of the National League North table – holding a seven-point lead over the Ministermen, who occupy 11th place.

In that time, York have undergone a change in management with Martin Gray swapping Darlington for the former Football League club in October.

But Armstrong, who spoke to BSAFCTV ahead of Saturday afternoon’s game, has backed Spartans give a solid account of themselves at Bootham Crescent.

He said: “One thing is for certain, the lads will be in a better frame of mind than they were the last time we played them.”

“I think we gave York a great game at Croft Park, if we took our chances early in that game it would have been a different story.

“We got punished for not taking our chances. They managed the game the best as well – which you’d expect from a professional team.

“We gave as good as we’ve got.

“Yes, they’ve had a change of manager and a change of style. We’ll not change our style, we play the way we play because of the players we’ve got.

“If we defend like we did on Tuesday [against AFC Telford], we’ll do okay.”

The last time Spartans played a competitive fixture at York fell 39 years ago in an FA Cup first round tie.

The Ministermen had taken the lead that day only for Terry Johnson to level from the penalty spot in front of a crowd of 5,088.

“The lads are really looking forward to playing at Bootham Crescent and to try and get a result there,” said Armstrong.

“Any result there would be brilliant – if they can get one, I’ll be chuffed to bits with the lads.”

“The bigger the crowd the better. You look at some of the players we’ve got, I think they like it when they get energy from the crowd.

“You can see they lift themselves a little bit and that’s when you want your big players to come to the front.

“You’ve got silent heroes in there who do exceptionally well – the likes of Hutchy, Budds, Atky – with Damo sitting in there protecting the back four.

“They’re the ones that people probably forget about a little bit but again, they’ll no have any qualms about playing in front of a big crowd.”