Blyth Spartans striker Bradley Fewster explained why he opted not to celebrate his dramatic 83rd-minute winner against York City on Saturday afternoon.

Fewster, introduced as a substitute, 20 minutes from time in place of Connor Oliver, netted the winner as Alun Armstrong’s men extended their impressive unbeaten run to 10 games.

It followed in thrilling circumstances as ex-Blyth loanee Macaulay Langstaff thought he had won the game for York, only to be flagged offside.

Then, 30 seconds later, from a quickly-taken Peter Jameson free-kick, Fewster raced through on goal to slot home his third goal of the season and send Croft Park into ecstasy.

However, while the home crowd and Fewster’s teammates went crazy around him, the former Spennymoor Town man appeared as the calmest man on the pitch. 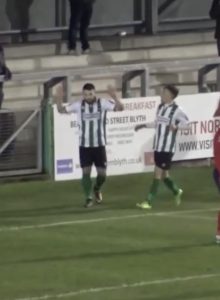 “When you come on as a substitute, it’s just trying to make the biggest impact as possible,” Fewster said.

“It’s mixed emotions because they’re my old club, but I didn’t think anything other than trying to score and help the team win.

“It isn’t the first time I’ve been involved in a frantic minute that like – that’s football isn’t it.

“That’s what fans love the most, last minute winners and as players, it’s the same as well.

“But when I scored, I didn’t want to celebrate, I just kept a cool head but I’m delighted we got the win.”

Fewster, whilst at Middlesbrough, appeared 24 times for the Minstermen in the 2015-16 season as a loanee.

But while his old side slumped to their sixth consecutive National League North away defeat, Fewster assured Blyth made it eight wins from 10 – and in the process – go level on points with the playoff places – two points off third.

The progress of Armstrong’s men is remarkable given a 3-0 home defeat to FC United of Manchester in early November sparked fears of a potential relegation battle.

It’s all about the confidence, insists Fewster.

He said: “The mood in the dressing room at the minute is good – confidence is high and the mood about the place is different to when we were stuck in a rot.

“We’ve just got real confidence now, every game we go into, we have confidence in each other and we understand the way each other plays and what everyone’s attributes are.

“We’re playing as a good team at the minute – so long may it continue.”