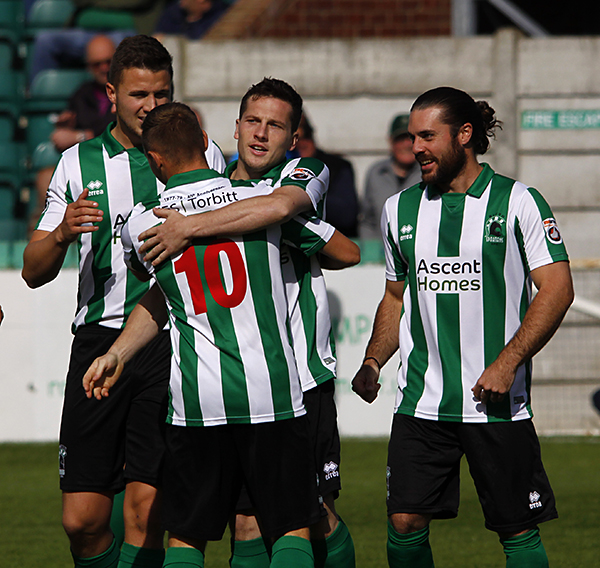 Blyth Spartans’ England C trio Ryan Hutchinson, Jarrett Rivers and Daniel Maguire have all revealed their delight at being called up by their country for a training camp, ahead of next month’s International Challenge Trophy final against Slovakia.

The three Spartans are part of a 22-man squad that has been selected to attend Lilleshall National Sports and Conferencing Centre in Shropshire between Sunday October 8 and Tuesday October 10. Based on how well they impress during those three days, they will then find out if they have been selected for the 16-man squad to face Slovakia.

And the news of his selection alongside his two team mates excites an overjoyed Hutchinson, whose fine form at the back over the last few seasons has finally saw the 24-year-old centre-back chosen by England C boss Paul Fairclough.

Hutchinson revealed: “I’m looking forward to it. I’ll be going down to Lilleshall for a few days with an open mind and just see how I get on.

“Obviously, we are all delighted to get called up to the England C squad. Hopefully, the three of us can do ourselves justice during the training camp.

“Personally, I’ve got nothing to lose by going down there, I’ll just do my best and have a good couple of days training alongside some very talented players.”

Winger Rivers echoed the defender’s sentiments and feels that the fact that having three of just five Vanarama National League North players selected from the club shows just how good of a start the Croft Park outfit have made in their first season back in Non-League’s second tier.

The 24-year-old added: “It’s a brilliant feeling to get called up to the England C squad. I’m just hoping that I’m ready to go.

“With the good start we’ve had, it’s good to see some of our players get recognised for what we’ve done on the pitch. Hopefully, all three of us get into the squad for the Slovakia game.

“Representing your country is a massive thing. There’s nothing higher than that in the semi-professional game and I’m looking forward to the opportunity.”

Maguire had received a call-up for England C’s double header against Panjab FA XI and Jersey FA XI earlier this year, but had to pull out because of injury. However, this time, the 24-year-old prolific striker is raring to represent his country and is hoping nothing will stop him from doing so.

‘Nipa’ remarked: “It was disappointing not to play for England C last time round, so I’m happy that I’ve not had to wait too long for another opportunity to prove myself. To help England C win a trophy would be great and not something that comes along everyday, but I don’t want to get too far ahead of myself.

“My aim is to do well in training and, if I can perform to my best, who knows what will happen? I hope all three of us get selected, because it will be a great thing for the club as well as ourselves.”