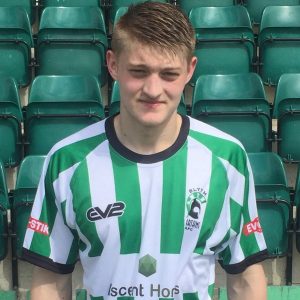 Luke Armstrong’s blistering form for Blyth Spartans this season has earned him a move to Premier League side Middlesbrough.

After arriving last summer from Cowdenbeath, the former Birmingham City striker – who has scored 23 goals this season – has established himself as a real force at Croft Park during his time under father Alun and the youngster has been rewarded with a move to Boro at the end of the current season.

The move sees the 20-year-old return to the Riverside – after he was released from a youth contract by Middlesbrough earlier in his career. However, Armstrong senior has conflicting emotions about seeing his son leave his squad – ahead of Spartans’ return to the Vanarama National League North.

The Blyth boss said: “The biggest problem for me next season is finding a replacement for Luke. It’s a massive blow for me, but I’m delighted for him because he always said that he wanted to get back into full-time football.

“It’s exactly what he has got, but I have got an option to take him back on loan if that is required to help with his development. Other than that, I’ve got to go out and find a replacement for him.

“He’s going to be a huge miss. I looked at him during the win over Halesowen on Saturday and his work-rate was amazing. Him and ‘Nipa’ [Maguire] just seem to have a really good understanding together, so I have a job on my hands to find a replacement.”

The successful partnership between Armstrong and Maguire has helped propel Spartans to Evo-Stik Premier League glory, but the Spartans manager knows that his side still has plenty of goals in it and there is also the option of strengthening further following his son’s departure.

The 42-year-old added: “My main objective is to find someone to replicate what Luke has done alongside ‘Nipa’, but I know the lads will continue to score goals regardless. There’s real quality in the squad and I need to strengthen for the summer, but there’s not a lot that strengthening really.

“I’ll have a word with the chairman and see where we are on that front.”

As part of the deal, the club are also expected to name a pre-season friendly with Middlesbrough sometime in the near future – as part of Blyth’s preparations for next season.

The club would like to thank Luke for all of his efforts during his time at Croft Park and wish him well for the future.