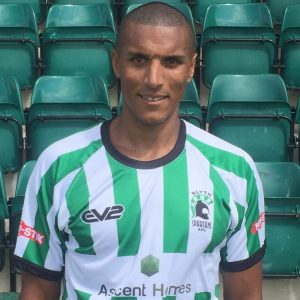 Summer signing Gavin Caines is hoping to use Nathan Buddle’s suspension to his advantage this weekend – as he looks to make his Blyth Spartans debut against Halesowen Town.

The 32-year-old joined Blyth in the close season from Rushall Olympic, but is yet to feature for the club. However, with Buddle’s three-game suspension for his sending off in the 3-1 win over Coalville Town starting on Saturday, Tom Wade now has a space to fill in the heart of defence.

And Caines is ready to step up if he’s given the nod ahead of Danny Parker and Richard Pell this weekend.

Caines said: “I’d like to hope I could get a start, now there’s a space up for grabs in the team.

“Obviously, it’s unfortunate for Budds to get sent off. He’s been playing well, but the suspension has kicked in now and – hopefully – if I get the call, I’ll be looking forward to my debut.

“If I can play well, then I hope to be able to stay in the team as well.”

Despite failed to make it off the bench in either of Spartans’ opening two Evo-Stik Premier Division fixtures so far, the Birmingham-born defender isn’t let his lack of playing time get him down just yet.

He added: “It’s slightly frustrating – as, obviously, everyone wants to be playing. I knew the record that the defenders had last season and I had a little feeling that they would start again this season because of how well they did last season, which is understandable.

“Every player is gunning for a start though, regardless of how good another player might be playing, and I’m definitely one of them. I want to be playing and I’m just waiting for my chance.

“If it comes on Saturday, I’m ready to take it with both hands.”

With such strength in depth in central defence, the Spartans’ manager will surely have a selection headache selecting Buddle’s replacement. However, Caines might just have an advantage up his sleeve, thanks to his travel arrangements to Halesowen.

While discussing this week’s back-to-back away trips, Caines explained: “Tuesday night was a long trip and Saturday’s will be for the lads as well. For myself, I’ll be travelling down the day before the game to see the family for the first time since I moved up here.

“So, for me, it won’t be too bad – as I’ll be having a lie-in while the lads are sat there on the coach!

“The lads have been doing it for a couple of years now though and their record away from home has been good. Obviously, we didn’t get the result on Tuesday, but I’d imagine that everyone is going to be right up for it and ready to go again – as we look to put things right.

“The long travels are hard, but there’s no better feeling than being sat on the coach with the boys after you’ve just won a game.”