Alun Armstrong has praised the Blyth Spartans fans during what was a disappointing Buildbase FA Trophy exit at the hands of Vanarama National League North side Altrincham – after the Croft Park faithful chose to stick with the players until the end of a frustrating 3-2 defeat.

Altrincham raced to a 3-0 lead at half-time, thanks to a brace from Sean Miller and then an impressive team move a minute before the break ended with Craig Hobson finding the net.

Blyth battled back in the second half through Luke Armstrong’s strike on the hour and an individual piece by talismanic skipper Robert Dale in the last minute. Richard Pell then thought he’d secured another 30 minutes of extra time with a powerful header, but Alty stopper Tim Deasy produced a fantastic save to deny Spartans another famous cup comeback.

And while the game produced a number of frustrating moments for the Blyth fans in attendance, Armstrong snr appreciated the support that his players received from the stands and he has called on them to carry on in the same vein when his side return to Evo-Stik Premier League action against Barwell on Saturday.

Armstrong said: “The crowd definitely played their part in trying to help the lads over the line at the finish. You could hear it all around the ground.

“To be fair to the crowd, they could have easily got on the players’ backs in the first half but they didn’t. They threw their support behind them and, once we got the first goal, you could feel it starting to turn and they started to lift.

“Robbie then gets the second one and they never shut up after that. I wish they could be like for the whole 90 minutes – as it really does help you.

“If we can get that noise from the crowd in the last ten minutes when we were on top, then the lads will respond to it. I know some people will say that the players need to do something worth shouting about first, but it works both ways.

“If we get the noise and the support from the stands, the lads will kick on. I have no doubt about that – as it’s six and two threes really.

“Hopefully, on Saturday, the crowd will be back on form and nice and loud once again. It would be good to get another 500 plus again through the gates and take it from there.”

While the 41-year-old was full of praise for the Spartans supporters, he was less than thrilled with what his players served up in the first 45 and that was made even more apparent when he marched his players out early for the start of the second half. His players responded in fine style, but Armstrong revealed that – despite their late flurry – their performance wasn’t enough for them to deserve to go through.

The Blyth boss added: “The lads know that we were nowhere near what we’re capable of in that first half and we never got started. I think it took us probably an hour to get started and it’s a shame, because I said that this was their chance to go out to set up a real test against Macclesfield in the next round.

“Again though, I thought the first half was nowhere near good enough. We never moved the ball, we never defended properly, we never closed them down, they worked a lot harder than us and we didn’t match them.

“We weren’t at the races for the first half and I had a little pop at the lads at half-time and they took what I said on board. They knew exactly what was wrong and – to be fair to them – ten minutes after that, they got themselves going and we probably could have forced extra time in all honesty.

“Did we deserve it though? Probably not.”

Known to be very honest in his interviews during his time at Blyth so far, it was to be expected that Armstrong would tell his players exactly what he thought at half-time and not mince his words. While Blyth fell just short after a marked improvement after the break, he took some consolation that this performance had not come during Spartans’ league campaign.

When asked what exactly he said during the half-time break, Armstrong revealed: “It wasn’t rocket science, to be honest with you. They didn’t work anywhere near to the standard that they have been working at.

“They got great ability with the ball and, when they move it quickly, no one can get near us. For some reason, they were running straight over the top of us.

“I’ve got to be honest and just say that we got beat because we didn’t work as hard as the opposition, which is really disappointing – as I’ve never seen that before, going all the way back to before I came to the club. I’d never seen them get turned over in any game and it was disappointing, but the big plus is that is wasn’t a league game and it hasn’t cost us three points.” 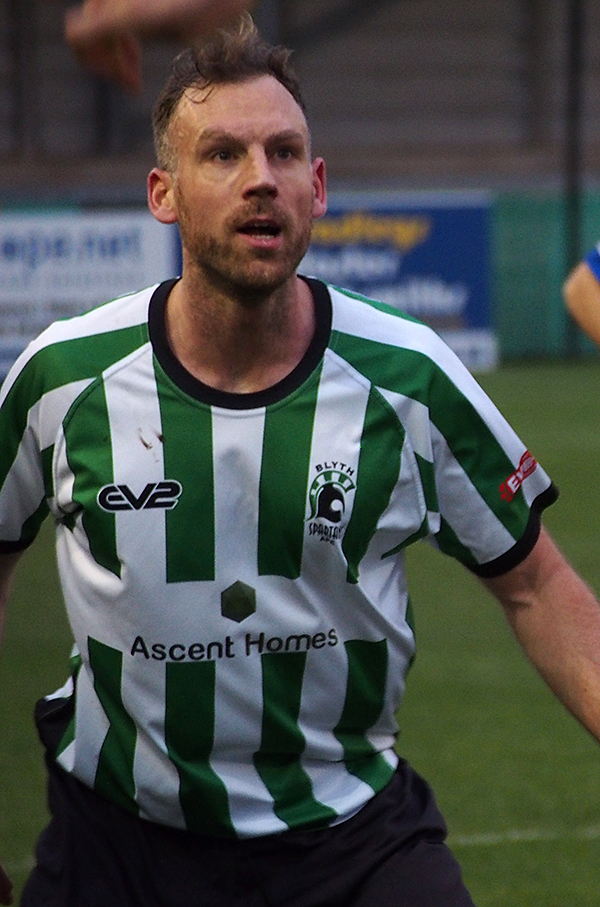 Dale set up a tense finale for the Robins with a superb solo goal, before Pell’s last-gasp header was palmed over the bar by Deasy during four minutes of added time. Even though it was a fantastic stop by the keeper, Armstrong couldn’t help but think that his side would have progressed had that chance gone in – after their opponents had seemingly played their hand too early, before holding on at the end.

Armstrong stated: “If Pelly had scored right at the end, we would have won the game [in extra time]. I’m pretty confident and we all said that on the bench.

“They had thrown everything at it and gone really early. They couldn’t maintain their work rate from the first half, because of the intensity of where they were working at, and you could see that they were gone after an hour.

“We absolutely battered them for the last 30 minutes and that’s the Blyth side I know. They’d thrown everything at it and fair play to them, but – had we nicked that at the end – I could have been standing here talking about a different game.”